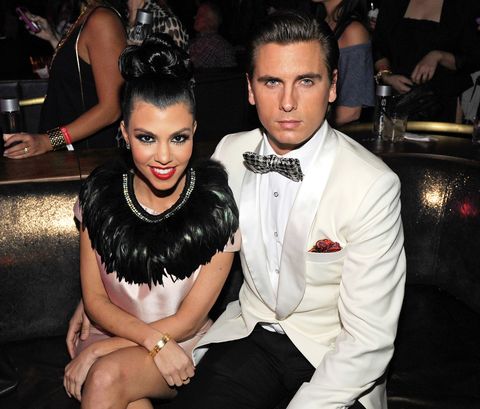 Update, 10/12: Kourtney Kardashian reached her breaking point on last night's Keeping Up with the Kardashians. Talking to Kim, the mom of three opened up about her struggles with Scott.

"I'm literally on the verge of a mental breakdown. I can't believe that this is where my life is at right now. I've worked so hard to keep this family together, it just makes me sad for the kids. He's not being a good partner to me. I could never rely on him, depend on him for one single thing and I don't want to show my kids that that's okay," she says, while tearing up.

Kim agrees that Kourtney and the family might be better off if they separated. "My mind is completely made up. I know that him just staying here, nothing would change," Kourtney says.

The couple has been separated since July.

Update 8/1: Almost a month after Scott Disick and Kourtney Kardashian called it quits, the father of three took to Instagram to let his 9.9 million followers inside his thoughts—which are currently *super* sad.

Taking a break from his paid-to-party gigs, Disick attended a friend's wedding where he shared a pic of a place card, reading, "Scott Disick Guest," a seat we are more than confident was once reserved for his ex.

The 'gram was paired with this stark epiphany: "When u realize the grass isn't always greener."

Oh Lord Disick. He knows he's missing out on a good thing.

Update 7/25: Lord Disick has spoken. Following his split from Kourtney Kardashian earlier this month, Scott finally broke his silence last night during an appearance at 1Oak at the Mirage hotel in Las Vegas. While making his way down the red carpet for the event, he was inevitably asked how he was holding up as a single man.

"[I'm] just taking it day by day," he told reporters. "With everything going on right now, I need to be positive for myself."

Update 7/10: It's happening.Scott Disick is moving into the $3.5 Beverly Hills Disick bought in December, People reports. His assistants were photographed carrying large bags of his belongings—including his colorful wardrobe—out of the home he shared with Kourtney and his three children.

"Kourtney has always taken Scott back and been by his side, but now with three kids it has gotten old," says a source. "Kourtney has to do what's best for the kids."

"Scott has been running around saying he's single," adds a source. "Kourtney dumped him after she saw the pics [in Monte Carlo] and he hasn't been home after a month-long party binge."

The pics in question show Disick cuddling up to his former girlfriend, Chloe Bartoli.

Neither parties have been available for comment, according to E!.

Samantha Leal Senior Web Editor I'm Sam, the senior editor at MarieClaire.com.
This content is created and maintained by a third party, and imported onto this page to help users provide their email addresses. You may be able to find more information about this and similar content at piano.io
Advertisement - Continue Reading Below
More From Celebrity
Megan Thee Stallion’s Hottie Bootcamp Is Intense
Katie Holmes' Mango Puffer Coat is a Winter Staple
Advertisement - Continue Reading Below
Kate Rewore Her Favorite Festive Tartan Dress
Kate and Charlotte Hunt for Spiders Together
Princess Diana's Nieces Opened Up About Their Aunt
Elizabeth Hurley, 55, Shows Off Toned Abs On Insta
Keira Knightley Won't Do Nude Scenes Filmed by Men
Kourtney Kardashian Is Dating Travis Barker
Priyanka Chopra Jonas Talks Her New Memoir
Priyanka and Nick on Their Quarantine Quality Time