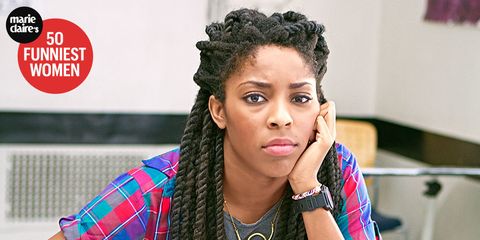 The upcoming People Places Things, about a single dad dating (and failing at dating), is a different kind of rom-com. The kind filled with more Real Talk than we've come to expect from the genre—thanks, in part, to its star Jessica Williams. (You recognize her as the force behind every The Daily Show clip you email your friends—see: "The Unborn Ultimatum.") Here, a quick, candid chat.

Marie Claire: Does People Places Things tap into any universal truths about dating?

Jessica Williams: The movie presents a relationship a bit more realistically: People can take their role in a break up and people can own up to their shortcomings and their strengths. Also, there's interracial dating in the film—my boyfriend is white, and my last couple boyfriends have been white just because that's the way the cards were dealt, but race wasn't really the huge crux of our relationship. In the film, interracial dating is allowed to just exist, as opposed to being a major plot point.

JW: Yeah, definitely—I can take it in small doses. I didn't grow up fantasizing about rom-coms, realistically. (I love films where women kicked ass, like Tomb Raider.) But I can really sort of dig into it when I want. I've seen all of them: 27 Dresses, How to Lose a Guy in 10 Days…

MC: Is there one that's your go-to guilty pleasure?

JW: I love Mandy Moore films—I really love How to Deal a lot. Anything that's a teenager-y sort of rom-com. Oh, and A Walk to Remember; I really vibed there.

JW: Any sort of superhero thing. That way, I could use this six-foot-tall Amazonian figure that I was blessed with. Plus, I really want to kick some ass.

A version of this article appears in the August 2015 issue of Marie Claire on newsstands July 21.

Jen Ortiz Deputy Editor, Cosmopolitan As deputy editor, Jen oversees Cosmopolitan's daily digital editorial operations, editing and writing features, essays, news, and other content, in addition to editing the magazine's cover stories, astrology pages, and more.
This content is created and maintained by a third party, and imported onto this page to help users provide their email addresses. You may be able to find more information about this and similar content at piano.io
Advertisement - Continue Reading Below
More From The 50 Funniest Women of 2018