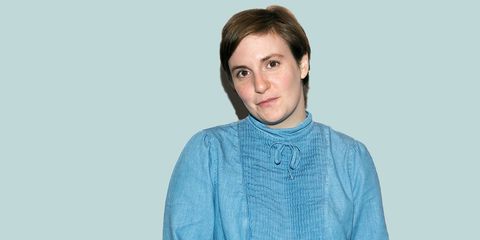 Lena Dunham wants to change the face of your inbox. Together with Girls executive producer Jenni Konner, the actress/author is bringing you Lenny Letter, a feminist newsletter for young women who want thought-provoking essays along with their style and beauty advice.

"Our subscribers are everything to us, because we want to entertain and inform you, but we also want to make the world better for women and the people who love them," Dunham and Konner say in their welcome note. "That means keeping abortion safe and legal, keeping birth control in your pocket and getting the right people elected, all while wearing extremely fierce jumpsuits."

This is good news for those of us who practically live in a jumpsuit, and great news for women in general. Yes, there's an abundance of feminist publications out there (ahem the one you're reading now ahem), but they're missing one thing: Lena Dunham's unique voice and POV.

Dunham tells Buzzfeed that Lenny will be for "an army of like-minded intellectually curious women" who "want to bring change but also want to know, like, where to buy the best tube top for summer that isn't going to cost your entire paycheck."

The self-funded newsletter—which will eventually be supported by advertiser and affiliate marketing dollars—promises to highlight unique voices from Lena and Jenni's celebrity friends and its core staff (including EIC Jessica Grose and adviser/Marie Claire contributing editor Audrey Gelman), so expect a wide variety of personal essays and opinions—and hopefully a 1,000 word missive on girl power from Taylor Swift.