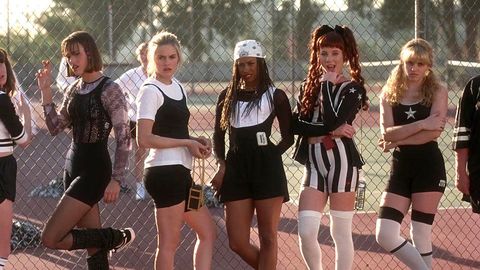 Thanks to watching Clueless every day during our "post-adolescent idealistic phase," (get it?) we know the movie well—*almost* as well as Cher knows her way around an Alaïa dress. To celebrate Clueless' 20th anniversary, we've compiled a list of a few things you never knew about the iconic teen movie. All we can say is—prepare to be totally buggin'.

"The first day we shot the scene in debate class. And Alicia said, the Hate-i-ans instead of Haitians, and everybody started to run up to her and tell her it was wrong," Director Amy Heckerling said. "I had to stop them. It's much funnier the way she said it. That was Cher."

2. The "Rollin' with My Homies" dance was improvised.

"I did my go-to, funny, whatever-I-thought-was-a-douche-y dance at the time," Jeremy Sisto (who plays Elton) said. If by "douche-y" he means amazing, yes.

3. Sarah Michelle Gellar almost got the part of Cher.

Your favorite valley girl was thisclose to being played by a Vampire Slayer.

4. Alicia Silverstone was cast thanks to Aerosmith.

Remember when Silverstone starred in Aerosmith's video for "Cryin'"? Neither do we, particularly, but it landed her the lead in Clueless. "I saw the 'Cryin' video for Aerosmith and when Alicia gave the finger, I said, 'There's my girl,'" recalled Heckerling.

For some reason it's not currently in our closet.

6. That couple making out in the swimming pool? They got engaged.

"Me and the ADs were saying that if any of the extras wanted to play a couple in the swimming pool that would be making out, they would get extra money for that because they would be wet," Heckerling said. "So, you know, a couple of people volunteered: a cute guy and a cute girl. And I thought, well, they'll make a nice couple. So we asked them if they wanted to do it, and they looked at each other and thought, 'Yeah, okay.' Years later, I was walking down Melrose and I hear some people going, 'Amy! Amy!' And I turn around, and it was them. They met that night. They're engaged."

"No, I don't think they're still together," he said. "I would be surprised. But what the hell do I know?"

It had the working title "Clueless in California" but was picked up by Paramount when the budget got too high.

Even more impressive, she had 63 costume changes.

"I was psyched," he said. "Growing up you hear these actors, and granted, they're talking about sex scenes and not just kisses, but they're like, 'Oh, it's all technical. Nothing's there. Nobody's excited. It's all just kind of embarrassing.' I remember thinking, 'Is that really true?' And then I remember thinking, 'This is pretty awesome.' I sound like a total perv."

11. The phrase "total betty" is a 'Clueless' original.

You better believe Amy Heckerling invented her own terminology for the movie. On that note, bye, we're audi.