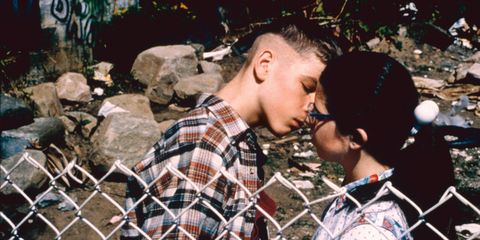 There are certain movies you watch when you're younger and think, "Wow, that was different." You may get it, you may not, but one thing's for sure—they're a step (or 12) beyond your typical song-and-dance, happy-ending kid stuff. Here, a look at some of the films that changed how we thought about the world then—and see totally differently now. (*Adds to Netflix queue*)

Advertisement - Continue Reading Below
1 'Welcome to the Dollhouse'

Welcome to the Dollhouse was unlike every coming-of-age movie circa 1995 in that it was disturbingly accurate in portraying the injustices of middle school/adolescence. Dawn Weiner is a 7th grader who is unpopular, simultaneously teased/hit on by the school bully, and mocked by others in her grade. After asking why the other girls despise her, she's told—in all 7th grade candor—that it's simply because she's "ugly." There's no happy ending, no swept-off-her-feet moment, no "wow, thank goodness that happened" feelings. Re-watching it, you'll immediately think back to your own experiences in middle school—and feel relieved we all made it through.

Stealing Beauty is one of those quintessential coming-of-age movies that becomes an instant cult classic—if you grew up at the time, you loved it through and through. If you didn't, well, you could probably take it or leave it. It was this movie that cemented Liv Tyler as the next "It" girl, and teens everywhere were transfixed by her nuanced sexual awakening that was somehow both familiar and new. Watching it now, it takes you away to the moment of discovering sex—in all its fresh, tension-filled, innocent glory.

No one really knew what to make of Kids when it premiered, with some critics dismissing it as exploitative and borderline child pornography and others applauding it as a wake-up call for kids' sexual behavior in the '90s. In fact it still has people scratching their heads. But for many of us, it exposed a side of sex we hadn't seen—where real consequences come from young kids who don't really know what they're doing. But does anyone?

Ghost World follows two high school graduates and best friends who grow up in every sense of the word. It featured protagonists that weren't supremely likeable but endeared themselves to you anyhow. It felt cool. And watching it from this side of the puberty fence, it's about the cruelty you can inflict on others, starting over, and changing from what you always thought you would be. Oh, and fried chicken.

5 'The Dangerous Lives of Altar Boys'

The film, which is set in 1970s rural South, follows the monotonous, difficult trajectories of four altar boys. Together, while collaborating on a comic book, they navigate the typical teenage stuff—girls, booze, pranks—but with some very adult twists. It doesn't always hit the right notes, but in that sense, it mimics growing up pretty perfectly.

My Girl did an amazing job of showing the seriousness of adolescence in a way that was objective and not condescending. Vada is every precocious kid who already felt like an adult in middle school. As a kid, you probably saw a lot of yourself in her. As an adult, you see how adults saw you and you'll feel fine about it.

No movie quite captures the deep burn of teen angst like The Breakfast Club, which set out to teach a generation of teens that even the kids in other cliques were suffering on the inside too.

8 'The Edge of Seventeen'

Since this movie came out in 2016, you won't be able to compare a pre- and post-pubescent reaction, but there's still a lot there for adults watching after experiencing their own coming-of-age moments. The Edge of Seventeen offers an honest look at the most awkward and self-destructive moments of being a teen.