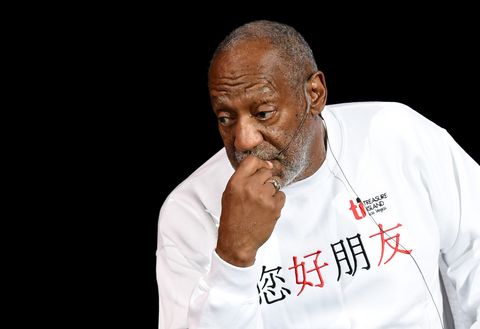 This is big. After a flood of allegations about Bill Cosby's predatory past, and nothing but silence from Cosby and smear campaigns from his legal team, a judge has ordered Cosby to give a sworn deposition in October related to an ongoing lawsuit with Judy Harth, Us Weekly reports. This will be the first time in more than a decade that Cosby has been ordered to address the allegations in court.

In a civil suit last December, Huth claims that Cosby molested her in the Playboy Mansion more than 40 years ago when she was just 15. The statute of limitations on the sexual assault has since passed, but Huth is claiming that she has suffered extreme emotional distress as a result, which gives her case clearance. Cosby's lawyer is claiming extortion (something his legal team has done before), and filed a countersuit.

Cosby will be questioned by Huth's lawyer, Gloria Allred, who now represents a number of his alleged victims.

Given that court documents have shown Cosby admitting to drugging a woman for sex, and that 34 other women have come forward to claim that they, too, have been sexually assaulted by Cosby (and there are suspected to be others), this is a highly anticipated testimony—and one that hopefully leads, finally, to justice.

Samantha Leal Senior Web Editor I'm Sam, the senior editor at MarieClaire.com.
This content is created and maintained by a third party, and imported onto this page to help users provide their email addresses. You may be able to find more information about this and similar content at piano.io
Advertisement - Continue Reading Below
More From Celebrity
Prince William Mentioned Harry By Name, Finally
Republicans Want Meghan Markle Stripped of Title
Advertisement - Continue Reading Below
Princess Diana Would Be "Horrified" By Portrayals
The Cambridges Head Out on Vacation
Spice Girls Reunion Tour Might Feature Posh Spice
Prince Charles' Revealing Joke About the Throne
Some People Think Prince Harry Sounds American Now
Prince Charles May Make Buckingham Palace a Museum
Chrissy's Daughter Luna Is Learning to Read
The Queen Spent a Night in Hospital