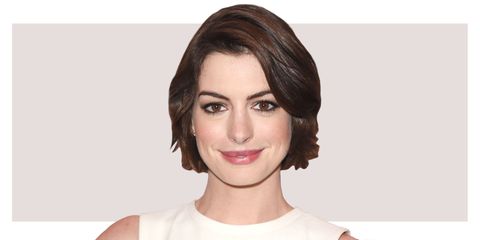 Anne Hathaway and Robert De Niro are definitely not the two names you immediately think of when you think "buddy comedy"—but, somehow, they work. The two, along with co-stars Adam Devine, Andrew Rannells, and Anders Holm, star in Nancy Meyers' newest film The Intern, which centers around Jules—a woman dealing with the huge success of a start-up business, juggling her family, and also dealing with a "senior" intern to boot—and it is, above all else, charming. But perhaps more importantly, it's also another examination of what it means to be a woman, a mother, and a business leader in today's world.

We caught up with Hathaway (alongside Mr. De Niro himself) to chat about her favorite scenes, feminism today, and what a script like this means for all of us.

Marie Claire: This was a really interesting story in that it wasn't a romantic relationship or a father-daughter relationship—it was a mentor/mentee relationship. Something you don't see a lot of. What were your thoughts when you first read the script?

Anne Hathaway: Oh, I loved it. I loved the mixture—how funny it was, how smart it was, that it wasn't afraid to get emotional. I think a lot of times when people think of movies, they think of it in terms of it can be funny *or* it can be dramatic. It's just a lot of "it can be this but it can't be that." And I feel like Nancy found a way for it to be a little bit of everything and to be really satisfying.

"I really loved the vomiting scene. I realize that's a weird thing to say."

MC: Was there any scene in the movie—comedic or dramatic—that you really loved filming?

AH: I really loved the vomiting scene. I realize that's a weird thing to say. But everything we had filmed up until that point had been really choppy—it was the first real scene we got to do. And I'll never forget being off-camera, trying to get kind of method, trying to put myself in that sick place, and that first take we did where I'm sort of heaving over a trashcan, all of a sudden I feel Bob's hands just pull my hair back. And I remember thinking, "That is so nice!" I don't remember if I was feeling it as Jules or as me, but that's what I remember as a highlight in the film!

MC: In the film, Jules is a working mother who feels a bit of a stigma about being one—her husband is a stay-at-home dad, and she has to navigate the politics of the moms at school. In one of the scenes, she's exasperated—"It's 2015." Why do you think we're still grappling with the logistics of working moms and SAH dads?

AH: Well, I think even though there's been amazing things that have been done and there are great, individual stories that are exceptional, it still is not the norm for everyone and everyone is not having the same experience. So I think even though we've come so far, there are still miles to go, and we need to keep talking about it until we get there. I mean, it's about equality, it's about rights. That's what feminism is to me, it's about everyone getting an equal seat at the table.