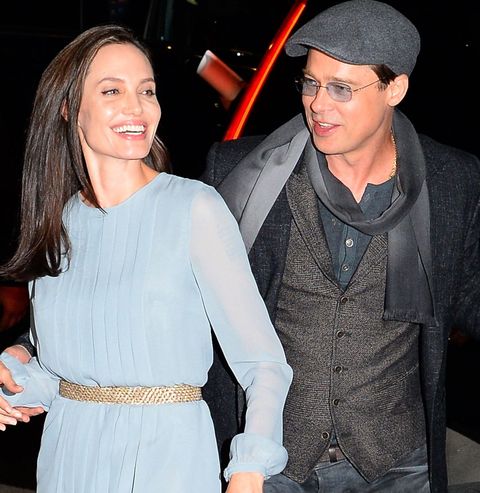 Things we're excited to see in By the Sea: Brad Pitt being directed by a woman for the first time, and—more specifically—that woman being his wife, Angelina Jolie. The couple recently kicked off promotion for their second movie together, and Jolie spoke to The New York Times about the vulnerabilities she faced while filming—especially in regard to post-mastectomy nude scenes.

"There were lots of scenes I wanted to change or cut," she said. "I realized it was going to be me [naked] in that bathtub. But I told myself, put all of that aside. Like, you can't change or cut this scene because you've had a mastectomy, or because we're married and people are going to analyze this or that. That would be cheating."

Jolie tried to play by the rules while directing, a somewhat challenging experience given she's also By the Sea's star. "I'm hysterically crying and then calling 'Cut!'" she said. "Or during a sex scene I am calling "Cut!" on Brad. You had to laugh at how bizarre it was."

While directing Pitt was an anomaly due to them being married, Jolie also noted that her husband had never been directed by a woman before: "I'm the first female director that Brad's ever worked with. That doesn't seem right when you think about it."

Also not right? Angelina Jolie being called a "minimally talented spoiled brat" in leaked emails between Scott Rudin and Amy Pascal. "I didn't read any of them," she said. "There are certain things that bother me and certain things that don't. Personal attacks on me? I think I'm just so used to it."

The fact that Jolie is used to personal attacks, combined with the fact that she's the first female director her husband has worked with, isn't painting a super female-friendly picture of Hollywood—but if anyone can change the industry's sexist treatment of women, it's her. And Jennifer Lawrence, obviously.

Mehera Bonner Contributor Mehera Bonner is a news writer who focuses on celebrities and royals—follow her on Instagram.
This content is created and maintained by a third party, and imported onto this page to help users provide their email addresses. You may be able to find more information about this and similar content at piano.io
Advertisement - Continue Reading Below
More From Celebrity
J.Lo Claps Back After Botox Comments
Meghan Wasn't Appreciated for Royal Contributions
Advertisement - Continue Reading Below
Harry & Meghan Have Had a Painful Year Since Exit
The Queen's Hot Grandnephew Is a Thirst Trap
Watch Diana Play Impromptu Piano in Rare Clip
Peek Inside the Cambridges' Country Home
Harry Is Heartbroken About His Family Situation
William and Harry Could Fight Over Diana's Legacy
William Reveals Which of His Kids Is the Cheekiest
Serena Williams's Daughter Is Taking After Mom