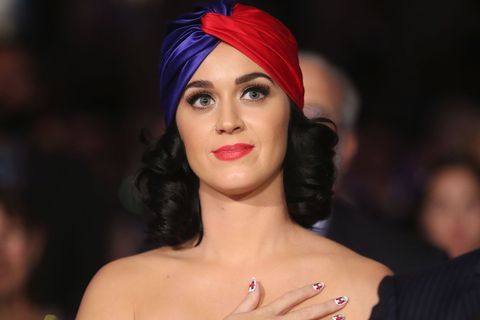 Katy Perry is number one y'all. Yep, she just surpassed Taylor Swift as the highest paid woman in music. According to Forbes, the pop star makes $2 million per city she plays in, and—thanks in part to her Prismatic World Tour—raked in an estimated $135 million between June 2014 and June 2015.

As for Tay, she came in second on Forbes' list ($80 million to Katy's $135), and despite potential bad blood between the two stars, what's important here is that two women are making almost as much as their male counterparts. While Forbes won't announce the earnings of male musicians until December, they say female earnings were "competitive." 🙏

Swift and Perry probably wont frequent the same squad anytime soon, but closing the wage gap is a pretty good thing to have in common.

Mehera Bonner Contributor Mehera Bonner is a news writer who focuses on celebrities and royals.
This content is created and maintained by a third party, and imported onto this page to help users provide their email addresses. You may be able to find more information about this and similar content at piano.io
Advertisement - Continue Reading Below
More From Celebrity
Joie de Tracee
Jennifer Lopez and Ben Affleck: Everything We Know
Advertisement - Continue Reading Below
Harry & Oprah's Mental Health Doc Has a Title
Serena Williams Might Miss the Tokyo Olympics
Jennifer and Ben Have "Unreal" Chemistry Together
The Sussexes Marked Archie's Bday in a Lovely Way
Queen's Cousin Accused of Selling Access to Putin
Meghan Wore a Meaningful Necklace for Vax Live
How Celebrities Are Celebrating Mother's Day 2021
Gabrielle and Kaavia's Mother's Day Pic is So Cute