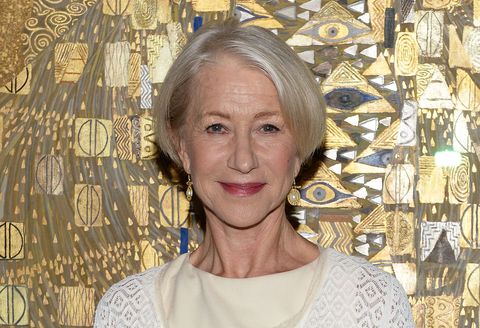 If there's one positive takeaway from #OscarsSoWhite 2.0, it's that the Academy is ready to deal with the systemic diversity problem in Hollywood. The fact that no minority actors were nominated is something most Academy members have already expressed outrage over —but Helen Mirren has a slightly different take.

"I think it's unfair to attack the Academy," Mirren says in a new interview. "It just so happens this year it went that way...Idris Elba absolutely would have been nominated for an Oscar. He wasn't because not enough people saw, or wanted to see, a film about child soldiers."

Hmmm...no offense to the Dame, but this line of thought seems somewhat problematic. Isn't there a responsibility for Academy members to see movies regardless of how sad they are? And what about Oscar-winning films with predominantly white casts that are also about tough subjects? What makes people "want" to see those movies? Mirren's reasoning seems like less of a valid excuse and more of a cop-out.

"I'm saying that the issue we need to be looking at is what happens before the film gets to the Oscars," she continues. "What kind of films are made, and the way in which they're cast. And the scripts...it's those things that are much more influential ultimately than who stands there with an Oscar."

It's true that fixing the diversity issue in Hollywood starts with hiring minority directors, producers, and writers, but the Academy certainly has to shoulder some responsibility—a fact that they seem fully on board with even if Helen Mirren isn't.

Mehera Bonner Contributor Mehera Bonner is a news writer who focuses on celebrities and royals—follow her on Instagram.
This content is created and maintained by a third party, and imported onto this page to help users provide their email addresses. You may be able to find more information about this and similar content at piano.io
Advertisement - Continue Reading Below
More From Celebrity
Things Are "Bad" Between William and Harry
A Look at Royal Family Portraits Through the Years
Advertisement - Continue Reading Below
40 Rare Photos of Grace Kelly Through the Years
Inside the Royal Family's Secret Code-Word System

50 Celebrities Channeling Disney Princesses
The 50 Most Popular Episodes of ‘Friends,’ Ranked
Iconic Party Photos From the Past
The Best TV and Movie Wedding Dresses of All Time
26 Stars Who Appeared On '90s TV Shows
35 Unforgettable Royal Wedding Scandals