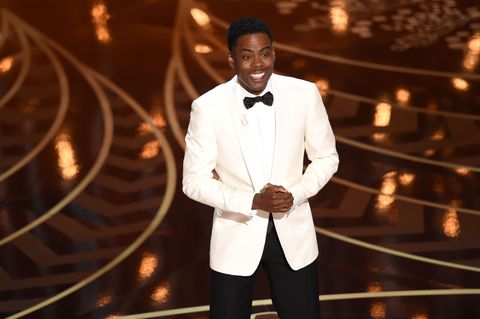 As the host of the Oscars the same year as the #OscarsSoWhite controversy, Chris Rock didn't have an easy road ahead of him when it came to navigating the notoriously hard-to-nail opening monologue. But damn if he didn't pull it off.

"Well, I'm here at the Academy Awards," he started his monologue, and then launched immediately into the jokes: "Otherwise known as the White People's Choice Awards. If they nominated the host, I wouldn't even get this job. You'd be watching Neil Patrick Harris right now."

"Everyone kept telling me, Chris you should boycott, you should quit. But how come it's only unemployed people to tell you to quit something? No one with a job tells you to quit," he continued. "They're gonna have the Oscars anyway, they're not going to cancel the Oscars because I quit—I don't want to lose another job to Kevin Hart."

Then, after some laughs, Rock launched straight into the racist history of award shows, and didn't hold back.

"Why are we protesting? Why *this* Oscars? It's the 88th Academy Awards. Which means, this whole no black nominees thing has happened at least 71 other times. You gotta figure that obviously happened in the 50s, 60s, in the years Sidney [Poitier] didn't put out a movie. I'm sure there was no black nominees that year. Because we had real things to protest at the time. We were too busy being raped and lynched to care about the Best Cinematography. When your grandma is swinging from a tree, it's a bad time to care about The Best Foreign Documentary Short."

Next, he addressed the boycott.

"Jada went mad, Will went mad—Jada said she's not coming, but...is she on a TV show?" he said. "Jada boycotting the Oscars is like me boycotting Rihanna's panties—I wasn't invited! But I understand you're mad. Her man was not nominated for Concussion, I get it. It's not fair he was paid 20 million for Wild Wild West, okay?"

"This year, this Oscars, things are going to be a little different, in the 'In Memoriam,' black people who were shot by the cops on their way to the movies. Yes, yes, I said it. If you want black nominees, every year, you need to have just black categories. You already do it with men and women," Rock continued.

"Is Hollywood racist? You know, you gotta go at it the right way. Is it 'burning cross' racist? Is it 'fetch me lemonade' racist? No, it's a different type of racist. They're sorority racist. They're 'We like you Rhonda, but you're not a Kappa.' But things are changing. We gotta black Rocky this year. Yeah some people call it Creed, I call it Black Rocky. Because Rocky takes place in a world where white athletes are as good as black athletes—it's a sci-fi movie."

Then Rock got poignant. And said what you needed to hear.

"But what I'm trying to say is, you know, it's not about boycotting anything, it's just, we want opportunity. We want the black actors to get the same opportunities as white actors. That's it. That's it. You know? Just—you know, not just once, you know? Leo gets a great part every year, and all you guys get great parts every time. Jamie Foxx, he's one of the best actors in the world, Jamie Foxx was so good in Ray, that they went to the hospital and unplugged the real Ray Charles, was like we don't need two of these. But everything's not about race. You're not allowed to ask women what they're wearing anymore. Ask Her More, you have to ask her more. You could ask the men more! Everything's not racism, it's not always sexism. They ask the men more because all the guys are wearing the same thing!"

Finally, he introduced the first presenters—with a flourish. "You want diversity, we got diversity. Here's Emily Blunt and someone whiter: Charlize Theron."

Bravo, Chris, for addressing the elephant in the room—even if it did make some people uncomfortable. (Good.)

Samantha Leal Senior Web Editor I'm Sam, the senior editor at MarieClaire.com.
This content is created and maintained by a third party, and imported onto this page to help users provide their email addresses. You may be able to find more information about this and similar content at piano.io
Advertisement - Continue Reading Below
More From The Oscars 2021
Twitter Is Not Happy With How the Oscars Ended
Glenn Close Dances to "Da Butt" at the Oscars
Advertisement - Continue Reading Below
‘Ma Rainey’s Black Bottom’ Oscar Makes History
The Oscars Were All About the '90s Midriff
Alan S. Kim Channeled David Rose at the Oscars
How Daniel Kaluuya's Mom Reacted to His Speech
Carey Mulligan Is a Gold Goddess at the Oscars
Riz Ahmed Put Every Husband to Shame at the Oscars
The Best Red Carpet Looks at the 2021 Oscars
How to Watch or Stream the Oscars