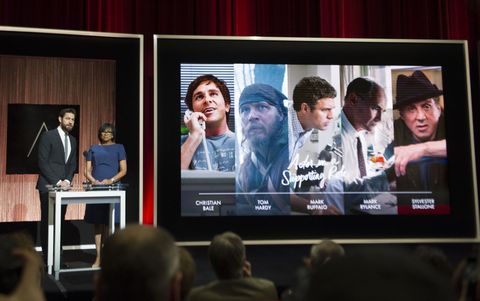 The Oscars may be addressing their diversity issues sooner than anyone expected.

The Academy of Arts and Sciences is expected to announce plans as early as next week to address 2016's overwhelmingly white nominee pool, according to the New York Times. One expected change is broadening the Best Picture field to include 10 films next year, like they did in 2010 and 2011.

Members of the Academy are also considering adding more nominees to the acting categories, which include zero people of color this year. The Times talked to Academy members who spoke on the condition of anonymity who said there's been talk of growing the acting categories to eight or 10 nominees for the first time ever.

The group is also considering temporarily barring from voting Academy members who haven't been active in film for a certain period of time, which would encourage more active participation from the more than 6,000 members.

These discussions come at the heels of major controversy surrounding this year's nominee announcements, which, for the second year in a row, have drawn #OscarsSoWhite criticism. Stars like Jada Pinkett-Smith, Spike Lee and Will Smith, who was snubbed for his role in Concussion, are boycotting the telecast, while Lupita Nyong'o and George Clooney have spoken out against Hollywood's diversity problem.

Academy president Cheryl Boone Isaacs issued a statement Monday saying, "We need to do more, and better and quickly."

This content is created and maintained by a third party, and imported onto this page to help users provide their email addresses. You may be able to find more information about this and similar content at piano.io
Advertisement - Continue Reading Below
More From Culture
Watch the 'The Morning Show' Cast Play Trivia
'The Great British Baking Show' Is Coming Back!
Advertisement - Continue Reading Below
Fans Are Already Clamoring for 'Sex Education' S4
Gina Yashere Shares Her Fav Black Female Authors
The 69 Most Graphic and Gorgeous Sex Scenes on TV
I'm Obsessed With the Ted Lasso Cast at the Emmys
All the Deets on Michelle's 'Bachelorette' Season
'Bachelor In Paradise' Spoilers: Your 2021 Guide
'Bachelor In Paradise' 2021: Everything We Know
Taraji P. Henson Hints She Might Release Music