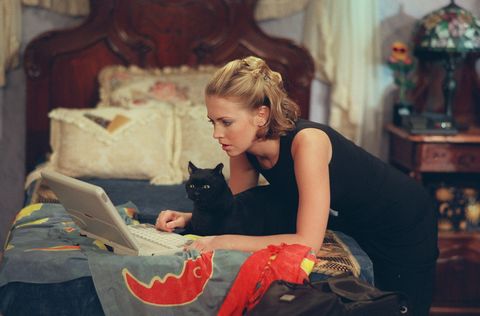 Sabrina, the Teenage Witch was a mainstay in many millennial homes—post-laptops, but pre-Netflix, we eagerly awaited Friday nights to see Sabrina, Harvey, Salem, and the gang deal with growing up—and Sabrina's growing powers, obviously. And now, you can catch all seven seasons and 173 episodes on DVD. (Treat yourself 2016?)

Here, we caught up with Sabrina herself, Melissa Joan Hart, to talk all things magic, producing the show, and early millennium fashion.

Marie Claire: Sabrina, the Teenage Witch was such a milestone for so many! Why do you think it resonated so widely?

Melissa Joan Hart: I think a lot of people either related to Sabrina as the girl who just wanted to blend in but always felt like she was standing out. But I think more people loved the magical element. People tend to turn to the type of entertainment that has an escapism quality and Sabrina gave people that with all of her crazy adventures.

MC: Do you remember the process for developing the show?

MJH: I produced the movie with my mom first and then we spun it off for the series, so I was the boss and the star, which was a nice place to be. Not just an actor for hire but a voice in the production as well.

My mom doesn't get nearly enough credit for her job as the woman spearheading the show. She is the one who was handed the Archie Comic book on a playground at my sister's school in Manhattan and sold it to Viacom as a Showtime movie. She always knew it would make an incredible series but no one would listen, until she cut together a trailer from the movie and pitched it to all four major networks at the time.

"I produced the movie with my mom first and then we spun it off for the series, so I was the boss and the star, which was a nice place to be."

She got three offers in the room for the series and we decided ABC was the right home because we were fans of the TGIF lineup and felt it was the right place for our show. But even once the show was on the air, the network didn't really support it the first season. They were counting on Clueless the show to be the big hit; we were just the little show that would follow that. But we ended up being the fan favorite and held our spot on that network (even forcing Everybody Loves Raymond to move to a different night of the week) for four years until we moved to WB for the final three seasons.

MC: What was your favorite episode to film?

MJH: I loved the "Pancake Madness" episode. It was so fun to play a girl with an addiction on a fun family comedy, even if it was pancakes. I love flawed and wild characters. But the episode where I was a boy was a blast too. There were too many to count.

MC: Have you stayed in touch with any of the cast?

MJH: Yes I'm about to have lunch with Soleil. Beth Broderick was on Melissa & Joey a few times (check out the Sabrina-esque episode where Mel finds out she's a witch). Caroline Rhea and I took our kids to an aquarium in Connecticut recently together. But the crew was whom I felt a real affinity for. They became my friends for life and we have a connection that is so strong. There was so much love, respect, and joy on that set. Rare in Hollywood.

MC: How was it like to work with the cast and crew on set?

MJH: The set was such a lovely place. There was no tension, no egos, and no drama. We all felt so blessed and were well aware we were on a ride that wouldn't last forever so we took advantage of the time we had together to make the most of the experience and have a ton of fun while making great TV.

"We had about seven real cats at any one time on the set, and two animatronic, and two stuffed animal type cats that we used for rehearsals or any sort of silly torture we had to instill on the poor guy."

MC: What's something you don't think most people know or remember about the show?

MJH: We had about seven real cats at any one time on the set, and two animatronic, (one that sits and one that lays down) and two stuffed animal type cats that we used for rehearsals or any sort of silly torture we had to instill on the poor guy. We would toss "Stuffy" as we called him, in the air and drag him along the floor. Anything we couldn't do with the expensive puppet or real cat. Look for it in the show. Once you realize what it is, it's freaking hilarious!

MC: Fashion flashback! Can you talk about these 5 looks (that happened during the series span) and what you thought of them?

This was the Nickelodeon Kids Choice Awards and this is still in my cedar closet. I think I found this embellished wrap skirt in my travels and added the backless tank, which I had in many colors and was my go to top. Oh and my date was Jonny Moseley who I still keep in touch with.

At the premiere for
Getty Images

This was my Cinderella moment at the premiere of my first starring role in a film, Drive me Crazy (My second starring role in a film is being released April 1, 2016 on screens called God's Not Dead 2.... a little different subject matter). This was Eduardo Lucero and the purse was an antique gift from my amazing acting coach Ivana Chubbuck that worked with me on the film.

This was I think a Juicy denim jumpsuit and J.Lo wore it a few days later I believe. I wish I had kept this (I keep a lot of my clothes in a cedar closet in my basement) because I think it would suit me today.

A the
Getty Images

This pink tank was from my friend's new clothing line, which didn't last, but I was trying to help her out by wearing it to a red carpet premiere of Britney's movie. Back in the 90's/00's the red carpet wasn't what it was today. It was more casual unless it was your premiere, then it was Cinderella time.

The Laueus World Sports Awards in Monte Carlo was an amazing event and Cartier lent me that necklace for the night. It was stunning and a bodyguard had to come remove it from my neck at 3 a.m. when I returned to my hotel room. The dress and corset were my favorite designer Eduardo Lucero, who I wore all the time, but the skirt had split as I arrived, hence the knot tied on the back. I had to walk up the stairs with all the greatest athletes in the world watching me, so thank God the split happened when it did and not during my walk up the stairs from the audience. My mom is standing to the side in the red dress.

MC: What spell or power did you wish you could actually do?

MJH: I hate everything about traveling but I love to explore new locations so I wish I could snap and arrive somewhere whenever the need or impulse would arise.

MC: Are you excited to show your kids the movie and show one day?

MJH: They have seen a little of it but I don't think they are very interested.

MC: What's coming down the pipeline for you?

MJH: God's Not Dead 2 comes out April 1st and I am working hard on my kids clothing line King of Harts but adding Queen of Harts for the spring. We are focusing mainly on doing awesome graphic t-shirts for kids and it's been a labor of love and the toughest project besides being a mom to my 3 boys. I'm getting set to open a sweet shop SweetHarts on the east coast and will document it for a fun family reality show and I will be directing a remake of a fabulous cult-hit thriller later this year in the UK.