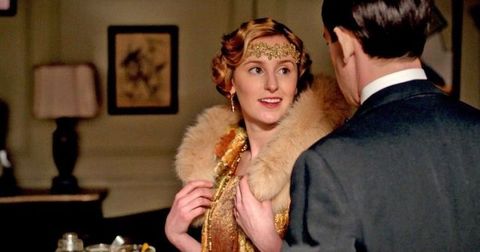 I won't spoil the Downton Abbey finale for you, but mmmmohmygod Edith. It's been about her all along.

Life's going just as well for Laura Carmichael, the actress who plays the third-place Crawley sister, given how she was spotted in London on Saturday with costar Michael Fox, AKA Andy Parker, the dyslexic footman (!!!). They're dating, according to Us Weekly, which leaves a whole fancy dinner party's worth of people gutted, including but not limited to Daisy, the Marquess of Hexham, Thomas before he got soft, and everybody who realizes how pretty Lady Edith is IRL.

Remember when Andy suddenly got hot in the last episode, and Daisy was like "Whoa" when she saw him hammering that roof in a T-shirt? Yeah. She wasn't the only one.

Chelsea Peng I'm Chelsea Peng, the assistant editor at MarieClaire.com.
Advertisement - Continue Reading Below
More From Celebrity
36 Celebrity Couples Who Love Some PDA
Ben Affleck Is Blond Now
Advertisement - Continue Reading Below
A Timeline of Charles and Diana's Relationship
Kendall Jenner Wants to Work for Beyoncé
Harry & Jon Bon Jovi Sing Together at Royal Event
Khloé Kardashian Is Being Trolled Over Febreze
A 'Friends' Reunion Special Is Coming to HBO Max
Katie Holmes Is in Head-to-Toe Chloé at Their Show
Ariel Winter Now Has Strawberry Blonde Hair
46 Stars Who Dated Before They Were Famous