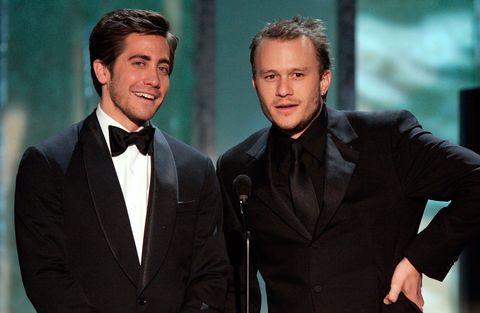 Jake Gyllenhaal and Heath Ledger cemented their friendship on the set of 2005's Brokeback Mountain, a movie that earned both of them Academy Award nominations. But heartbreakingly, Ledger passed away in 2008—and now Gyllenhaal is opening up about his friend's death eight years after the fact.

"Personally, it affected me in ways I can't necessarily put in words or even would want to talk about publicly," the actor recently told Jess Cagle (People and Entertainment Weekly's editorial director). "In terms of professionally, I think I was at an age where mortality was not always clear to me."

Gyllenhaal explained that Ledger's death taught him that while films are fleeting, the friendships you make on set are the exact opposite.

"There is also that [new song Macklemore song] where he says, 'The curtain closes and nobody notices.' I think that's true, and I think that's okay," he continued. "But I think at the time, I assumed everyone would notice—and they did with Heath dying, but I think it [gave me] the experience of, 'This is fleeting.' And none of the attention or synthesized love that comes from the success of a film really matters at all. What matters is the relationships you make when you make a film, and the people you learn from when you're preparing for a film. That changed a lot for me."