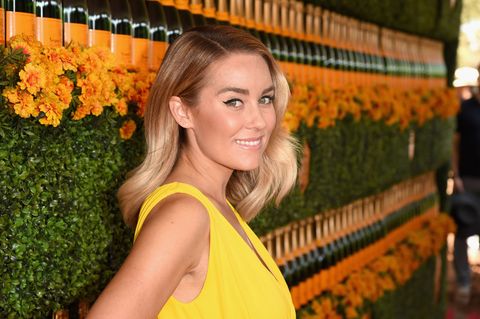 Please join us as we travel back to 2009, the year Heidi Montag and Spencer Pratt tied the knot on MTV's The Hills. It was the best of times, and—for Lauren Conrad—it was the worst of times. The reality star showed up her friend-turned-nemesis' wedding in a surprise totally-not-at-all-scripted "twist," but apparently she'd been lingering in a basement for hours beforehand.

According to LC, Speidi's wedding was scheduled for earlier in the day, but a power outage delayed the nuptials and totally effed up her plans. "The power went out, the generator went out and I said, 'I need to leave!'" Conrad tells Us Weekly. "And [producers] wouldn't let me leave! They literally locked me in the basement with two security guards and wouldn't let me leave! And I was like, 'You can't keep me here!' I was throwing a fit!" (Note: a Hills producer says Lauren "might have felt locked in, but she was not.")

The lifestyle guru had to wait two hours before the ceremony could be filmed, and by the time Spencer and Heidi said "I do" she was 100 percent over it. "At that point, this wasn't really my life anymore, and I left out the [church's] side door," she says. "So that's why in the final scene, I'm not leaving with everyone else—I'm taking a side exit out because I had a car waiting, and I needed to leave!"

Feel that chill? It's the giant cloud of early aughts shade that just entered the room.