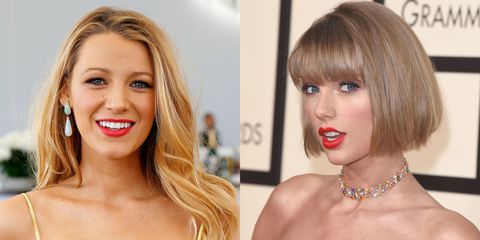 Please cast your mind back to July 4th, 2016, otherwise known as The Day Tom Hiddleston Wore a T.S. Tank Top and Frolicked Gleefully in a Sea of Supermodels. It was the best of times, it was the worst of times, it was Taylor Swift's annual Fourth of July party. A soiree brimming with it-girls, bemused shirtless men flopping down slides, and, you know, the usual suspects: Gigi Hadid, Karlie Kloss, Ed Sheeran, and...wait...Blake Lively?

You may not have seen her in the Squad Yearbook, but Blake and Tay actually go way back. It all started nine months ago, when Blake innocently Instagrammed this "Bad Blood" reference:

Naturally (by which we mean totally inexplicably), the internet assumed Blake was throwing shade, which prompted her to claim that she owns a Taylor Swift Voo Doo Doll. Like, in a fun way.

Basically, she was like, "Are you there God? It's me, Blake," and Taylor was was like, "yes, sweet summer child, I hath cometh."

Flash-forward a few months, and Taylor meandered over to Australia where Blake was filming The Shallows. Their day of Kangaroo hijinks presumably went well, because Blake attended Taylor's 1989 World Tour and gazed upon other Squad Members. She saw the future, friends, and it was rich and bountiful. "So it's gonna be forever," Blake probably whispered to herself on that fated night. "Or it's gonna go down in flames."

Also, this photo was taken:

A few months later, it was Taylor's birthday. Being well versed in traveling pants-based friendship, Blake declared her love with this roller coaster picture. Note her apt use of the phrase "goals." She knew, guys. SHE KNEW.

Blake also sent Taylor a pie featuring her beloved cats in marzipan form. Of course, this *was* in her Preserve phase, so she was especially crafty at the time.

And yeah, we're all Ryan Reynolds in this picture.

Mehera Bonner Contributor Mehera Bonner is a news writer who focuses on celebrities and royals.
This content is created and maintained by a third party, and imported onto this page to help users provide their email addresses. You may be able to find more information about this and similar content at piano.io
Advertisement - Continue Reading Below
More From Celebrity
Gigi Shared an Adorable Spring Selfie With Khai
Katie Holmes Posted a 15th Bday Tribute to Suri
Advertisement - Continue Reading Below
Chrissy Teigen Talked Stigma Around Infertility
Beyoncé Stuns in a Mesh Dress With Matching Gloves
Lizzo and Chris Evans Had the Best IG Interaction
Travis Shared PDA-Heavy Bday Tribute to Kourtney
How the Queen Ends Awkwardly-Long Handshakes
The Queen Has a Rule Against Bad Talking Family
The Queen Took a Pic of Philip With Her to Funeral
The Queen's Tolerance Was the Key to Her Marriage