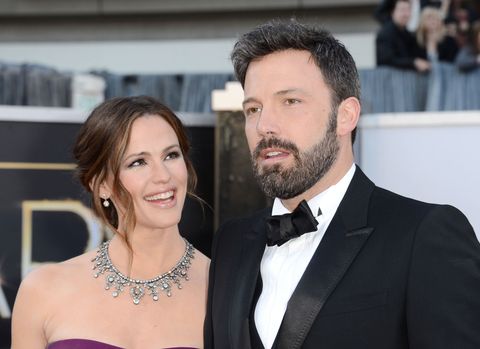 When Ben Affleck and Jennifer Garner announced their divorce, it was clear that love had died. Like, Cupid literally just passed out and was never heard from again. But, hark! After a recent report claimed that Ben and Jen were "making it work," it now appears as though they've called off their divorce—despite cheating rumors that left much of America feeling understandably iffy.

According to Us Weekly (one of the magazines that got initial rep-confirmation about Ben and Jen's split), the couple seem to be re-thinking their separation: "Jen mentioned that the divorce was going through very soon, and then a few weeks ago, things changed," a source says. "It does not seem to be moving in that direction."

The issue? They're kinda-sorta-maybe still in love with each other. "Jen seems to still be in love with Ben but doesn't allow her mind to go there," the source continues. "She just focuses on the kids."

Meanwhile, another source seems to think that "If it was up to Ben, they would be together. He feels like he can't live without Jen."

Understandable, since most of the internet can't live without Ben and Jen. And while no, infidelity is never okay, every couple has the right to work through their marital struggles in their own way. In other words, it's complicated.

Mehera Bonner Contributor Mehera Bonner is a news writer who focuses on celebrities and royals.
This content is created and maintained by a third party, and imported onto this page to help users provide their email addresses. You may be able to find more information about this and similar content at piano.io
Advertisement - Continue Reading Below
More From Celebrity
Harry and Will Have Been Arguing for Months Now
Prince Harry Doesn't Regret His Oprah Interview
Advertisement - Continue Reading Below
Archie Has a Distinct American Accent, Apparently
Hailey Wore a Nude Blazer and Micro Dress
Gabrielle's TikTok About Her Prom Date is So Funny
Victoria Beckham Shuts Down 'Spice World 2' Rumors
Kendall Jenner Shared Her Experience of Anxiety
'The Voice' Star Blake Shelton Opens Up About Gwen
Sussexes Share New Birthday Photo of Archie
Charles Is Still Upset Over Harry's Oprah Tell-All