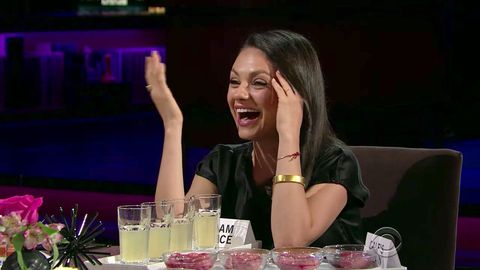 Ever wonder what's going on in Ashton Kutcher's pants? Probably not, because there are a million other things to think about, like pizza, and also the election. But for reasons that we don't fully understand, James Corden just asked Mila Kunis to educate viewers on her husband's penis size, so get ready to be a weird combination of intrigued/embarrassed.

Before getting to the clip, let's set the scene:

James and Mila are playing a game of "Spill Your Guts or Fill Your Guts" with Christina Applegate, the basic premise of which is to dish dirt or eat an array of gross food. Mila's immediately asked the question "Ashton Kutcher: carrot stick or beer can?" and chooses to spill. Though it should be noted that she gets epically confused and accidentally says "carrot stick" before changing her mind and saying he's "like a Guinness!"