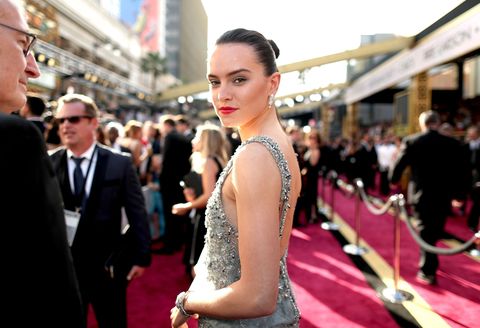 Daisy Ridley put her Instagram platform to good use on Monday, writing an emotional plea to end gun violence following the Teen Choice Awards. Her remarks were brief and to the point, not to mention completely non-confrontational.

"Thinking about how lucky I am like......... Serious bit: as I sat in the audience yesterday tears were streaming down my face at the tribute to those that have been lost to gun violence. I didn't get a great picture of the incredible group that came on stage but they were so brave. It was a true moment of togetherness. We must #stoptheviolence."

The post is no longer viewable because Daisy shut down her Instagram account after followers criticized her stance on gun violence. Before the shutdown, comments like "says the woman who kills people with guns in movies," "you're no better than Matt Damon," "didn't I see you using a blaster in Star Wars Episode VIII?" and "don't ruin Star Wars for any of us" were dominating the post, which can only be described as trolling at its finest.*

Apparently, Daisy explained her Instagram shutdown by saying she wanted "less distraction" (this comment was eventually deleted), and John Boyega also weighed in:

Instagram has taken new measures to help users combat trolling, but still—the fact that Daisy Ridley couldn't show empathy for victims of gun violence without being harassed is symptomatic of a much larger issue in this country.

Mehera Bonner Contributor Mehera Bonner is a news writer who focuses on celebrities and royals.
This content is created and maintained by a third party, and imported onto this page to help users provide their email addresses. You may be able to find more information about this and similar content at piano.io
Advertisement - Continue Reading Below
More From Celebrity
See the Royals Socialize at a 1991 Cocktail Party
Eugenie's Pics from Inside Harry and Meghan's Home
Advertisement - Continue Reading Below
Queen Trolled Tourists Who Didn't Recognize Her
Blake and Ryan Recreated Their First Date on IG
Charles Expertly Ignored Boris Johnson's Snafu
How Kitty Spencer's Wedding Dress Honored Diana
Dolly Parton On the #FreeBritney Movement
Will & Kate Are Nervous About George's Future
George Won't Be Forced to Go to Boarding School
Diana Would Have Written a Memoir Too, Friend Says