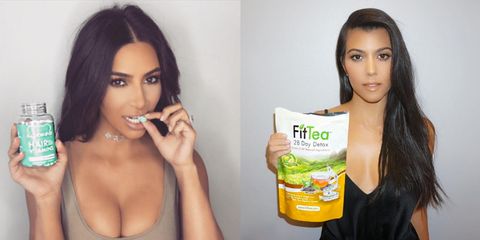 Ever wonder why celebrities just love a good "detox tea" on Instagram or why DJ Khaled constantly bugs you to "celebrate success right" with Ciroc vodka on Snapchat? Duh: They're getting paid to promote these brands. But it's not always easy to see when celebs genuinely just love a product, or whether they're being paid to share the brand with you on social media. That's why, according to Bloomberg, the Federal Trade Commission is cracking down on celebs who are a little too sketchy with their sponsorships.

The typical sponsored post usually says it's sponsored, but in a subtle way. For example, the the entire Kardashian family gets paid for sponsored social media posts, often for the same products. They denote the ads with hashtags like #sp or #spon:

#ad look at how long my natural hair is getting 😍 thanks to my @sugarbearhair vitamins 🐻 (yes people the bob was a wig ;)) They taste delicious and have become a daily part of my hair care routine! 💗 I love these little blue Bears ! 🙈 #sugarbearhair #spon

But Bloomberg reports that those hashtags may not be enough for the FTC. The hashtag #ad is okay if it's at the *beginning* of a post—but that #sp and #spon just don't cut it. And if the sponsored content is a video, the ad disclosure needs to be said out loud or shown on the screen. Adweek reports that this is now happening on Snapchat, with influencers including the hashtag #paid, #ad, or #sponsored on top of their snaps.

"If consumers don't read the words, then there is no effective disclosure," Michael Ostheimer, a deputy in the FTC Ad Practices division, said. "If you have seven other hashtags at the end of a tweet and it's mixed up with all these other things, it's easy for consumers to skip over that. The real test is, did consumers read it and comprehend it?"

The government plans on fighting this by going after the advertisers, not the celebs themselves. On top of sending out guidelines and giving online webinars, they're taking legal action against advertisers who don't follow the rules. Because celebrities usually do whatever the brand tells them in these cases—so don't go blaming DJ Khaled for talking about Ciroc every two seconds. Blame Ciroc for that.