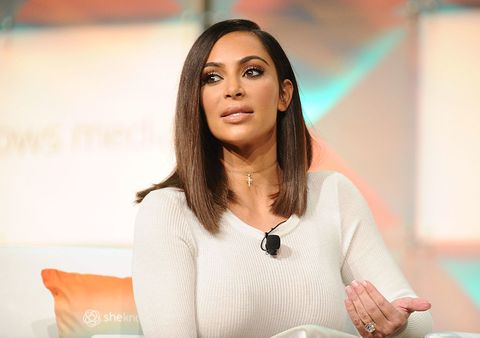 When Kim Kardashian gave the keynote speech at the BlogHer 16 conference earlier this month and proclaimed that she did not consider herself a feminist, she sparked a conversation on what it means to be a feminist today. On one side of the debate were those arguing that her celebration of her body, her curves, and her nude selfies clearly make her a champion for women's progress (whether she sees it that way or not). Others, of course, believe that her fixation on her body reinforces the female objectification that women have fought to dismantle for centuries.

On Monday, Kim herself took to her app to share a long post about why she doesn't consider herself a feminist.

She starts out by showing that she has a clear grasp of what feminism means:

"For me, feminist is someone who advocates for the civil and social rights and liberties of all people, regardless of their gender; anyone who believes that women should have the same choices and opportunities as men when it comes to education and employment, their bodies and their lifestyles."

Okay, yeah, looking good so far. She admits that she wants all of these things and is "all about empowering and uplifting women," and that as a result, she can see why people would view her as a feminist.

"I work hard, I make my own money, I'm comfortable and confident in my own skin, and I encourage women to be open and honest about their sexuality, and to embrace their beauty and their bodies."

Okay, those are all valid points. So, like, what's the issue here?

Apparently, the problem is that she doesn't want to "put labels on things."

"You're Republican, you're Democrat, you're bisexual, you're plus-size, you're poor, you're a criminal, you're a mother, you're a feminist. I'm a human being, and I have thoughts, feelings and opinions about a lot of different things. I don't need to be defined by those beliefs, just as much as I don't want to be set apart from—or viewed as being against—those who DO define themselves by those beliefs."

We hear what you're saying Kim. People's opinions are complicated and there's no quick route to getting to know the complexities of how someone feels about multifaceted issues like feminism.

"I feel that being grouped or labeled can create separation between people who do (or don't) fall into certain categories, when they may actually share many of the same beliefs and goals."

But, Kim, some of those things are beliefs (Republican, Democrat, feminist), and others are not (plus-size, poor, criminal, mother) so we can't really just lump it all together. And while it's absolutely true that we need to listen to each other rather than just throwing labels around, it's also true that it's important to align ourselves with certain movements as we try to make the world a better place.

Kim may not be ready to call herself a feminist, but we think—by definition—she most certainly is.

"The fight for equality is about ALL human beings being treated equally—regardless of gender, sexuality or ethnicity...I'll always fight for women's rights. Always."