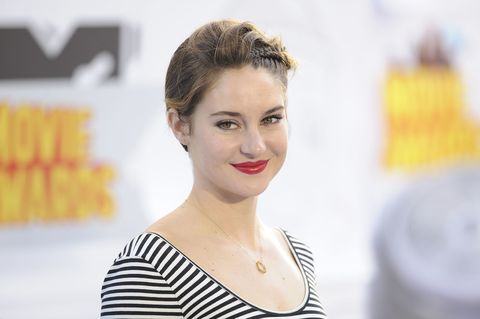 When Lionsgate announced its intention to make Ascendant, the final film in the Divergent series, a TV movie that would pave the way for a TV show, fans were more than a little worried that the actors from the films wouldn't be interested in following the series to television.

Those worries, it turns out, were totally justified.

Shailene Woodley, who stars as Tris in the Divergent films, has become the latest actor from the franchise to say publicly that she would not be on board for a TV movie.

"From what I know, they want to proceed with a television show, which is not something that I signed up to do," Woodley told E! News. "Out of respect to the whole scenario, there could be things that have changed, but I didn't sign up to do a TV show."

Woodley's statement echoes that of costar, Miles Teller, who told The Hollywood Reporter in August that he hadn't signed on to continue the Divergent story on television.

"At this point, it's a different set of circumstances. We'll see. I honestly haven't talked to anybody," he said. "We all signed on for it in hopes that it'd be released in theaters, and we all had every intention of finishing [the franchise]."

Kayleigh Roberts Kayleigh Roberts is the weekend editor at Marie Claire, covering celebrity and entertainment news, from actual royals like Kate Middleton and Meghan Markle to Hollywood royalty, like Katie Holmes and Chrissy Teigen.
This content is created and maintained by a third party, and imported onto this page to help users provide their email addresses. You may be able to find more information about this and similar content at piano.io
Advertisement - Continue Reading Below
More From Celebrity
Rob Lowe: Prince Harry Is Rocking a Ponytail Now
Rihanna Stuns in $2 Million of Diamonds and Rubies
Advertisement - Continue Reading Below
Fans Think Zayn Just Hinted at Proposing to Gigi
Ben Affleck Said J.Lo Faced "Sexist, Racist" Media
Kate & William Might Get Vaccinated on Camera
40 Celebrity Sisters Who Look So Much Alike
Iconic Party Photos From the Past
The Best TV and Movie Wedding Dresses of All Time
40 Rare Photos of Grace Kelly Through the Years