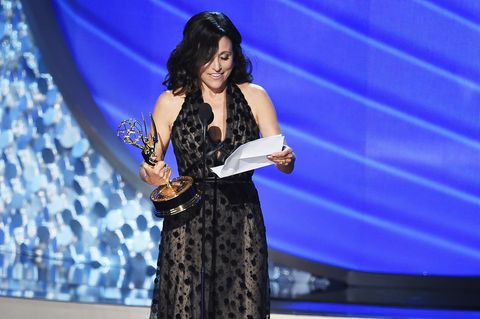 During Sunday night's Emmy Awards, Julia Louis-Dreyfus won her fifth consecutive Emmy for playing Selina Meyer on the HBO comedy Veep. (She has eight trophies in total, so seeing her on stage is a pretty common thing these days.) It wasn't a surprise that her acceptance speech was hilarious, but it also included an extremely poignant tribute to her late father that had the audience in tears.

First, she took a moment to address this year's presidential election, which seems more and more like Veep every day. "I'd also like to take this opportunity to personally apologize for the current political climate," she said. "I think that Veep has torn down the wall between comedy and politics. Our show started out as a political satire, but now it feels more like a sobering documentary. So I certainly do promise to rebuild that wall and make Mexico pay for it."

Then, Louis-Dreyfus got emotional, paying tribute to her late father, William Louis-Dreyfus, who died on Friday at 84. "Lastly, I would like to dedicate this to my father, who passed away on Friday," she said. "And I'm so glad that he liked "Veep," because his opinion was the one that really mattered."

According to the Journal News, William Louis-Dreyfus was a billionaire businessman and art collector who grew up in Paris but moved to America after his mother divorced his father. Before his death, he donated his multimillion-dollar art collection to the Harlem Children's Zone nonprofit.

Watch her full speech below: