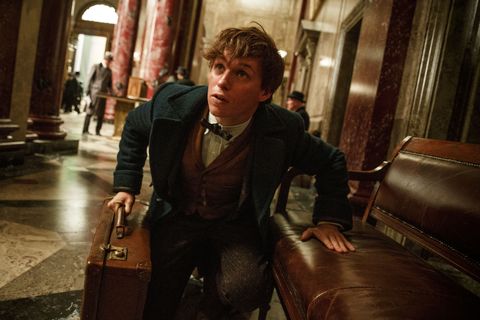 Attention all muggles and people who think they are wizards (no judgement, we get it): J.K. Rowling has released the third and final installment of her short story series on the history of magic in North America. The subject? Oh, ya know, just the Magical Congress of the United States of America, or as the cool kids call it, MACUSA. (!!!!!)

MACUSA will be a huge part of Newt Scamander's story in Fantastic Beasts and Where to Find Them, so Rowling's latest gift to the wizarding world is a must-read. Here are eight things we learned:

1. It's pronounced Mah—cooz—ah. The group originally started in the late 1600s as an "underground community" following the Salem Witch Trials, and was made up of reps from magical communities all over North America. Please feel free to reach out to your local congressmen at 1-800-WE-WISH-THIS-NUMBER-REALLY-EXISTED.

2. MACUSA was all about fighting bad guys. Their "primary aim was to rid the continent of Scourers, corrupt wizards who had hunted their fellow magical beings for personal gain."

3. Oh, and they recruited Aurors to help fight the good fight. One of the first 12 Aurors was Abraham Potter, who is totally related to Harry Potter.

4. There's zero love between the "No-Maj" (read: muggle) government and MACUSA. It pains us to think the Notorious RBG would be so unwilling to accept magic into her heart.

6. MACUSA opted out of the Revolutionary War. In 1777, the group held a meeting to decide if they should help their muggle friends win. They passed.

7. MACUSA practiced segregation. Intermarriage between wizards and muggles was illegal, and segregation stayed in effect through the 1920s. Also, the Magical Law Enforcement office was pretty strict: wizards caught committing crimes were executed.

8. And finally, MACUSA is located in the Woolworth Building. The famous NYC landmark transforms into "a space for wizards," so apologies in advance to the IRL security staff there. It's only a matter of time before the lobby is overrun by fans (*waves hello*).

Mehera Bonner Contributor Mehera Bonner is a news writer who focuses on celebrities and royals—follow her on Instagram.
This content is created and maintained by a third party, and imported onto this page to help users provide their email addresses. You may be able to find more information about this and similar content at piano.io
Advertisement - Continue Reading Below
More From Celebrity
There's Drama Over Prince Harry's Funeral Attire
Jennifer's Rep Breaks Silence on Adoption Story
Advertisement - Continue Reading Below
Princess Eugenie's Prince Philip Tribute
Serena Williams Signed a Major TV Deal With Amazon
Chrissy Wrote Luna the Sweetest Birthday Message
Prince Harry Has Met Princess Eugenie's Son August
The Queen Returns to Work After Philip's Death
A Brief History Lesson on Brad and Jen
Rihanna and A$AP Were Spotted on a Date
Prince Harry Is "Really Missing" Meghan Markle