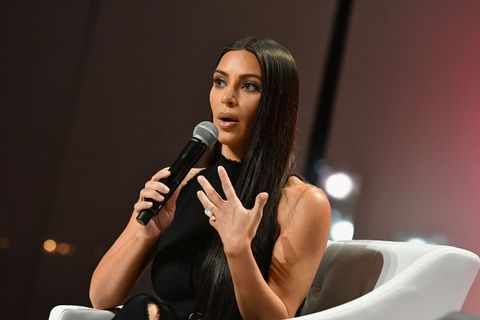 Kim Kardashian was recently bound, gagged, and robbed at gunpoint in Paris, and among the many items stolen from her jewelry box was a ring. Actually, make that a massive diamond ring worth a casual $4.5 million. The piece was a gift from Kanye West in celebration of his Adidas contract, and listening to Kim tell the story of how he surprised her with it is straight heart-breaking.

"It's a really cute story, he's going to kill me if I tell it," Kim told Andy Cohen during The Girls' Lounge dinner about a week before the ring was stolen. "I was sleeping and he woke me up in the middle of the night and said, 'Babe, I got you something from Adidas.' And I said, 'I'll get the shoes in the morning, babe, like, I'm sleeping.' And then he put a box on my pillow, the Lorraine Schwartz box, and he goes 'No, open your eyes,' and I opened my eyes, and it was a box, and I woke up! I was like, 'What is this?' He was like, 'You know, I just did that big Adidas deal, so I got you something from Adidas.' And he engraved "Adidas" on the band inside because he's funny like that."