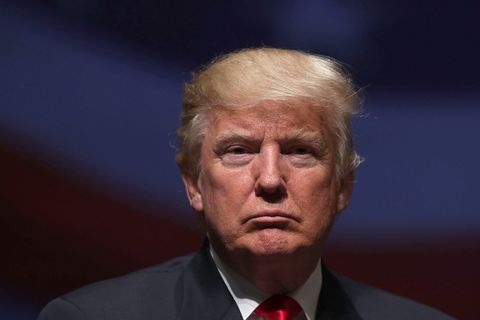 Donald Trump—you know, the presidential hopeful—was caught on a hot mic back in 2005 (meaning, the mic was left on between segments), and now there's audio floating around of him saying horrible gems like, "I did try and f*ck her, she was married" about an unnamed woman. He also said, "When you're a star, they let you do it...you can do anything...grab 'em by the pussy."

The audio was leaked from unaired footage of an Access Hollywood segment, and features the voices of Trump and Access Hollywood host Billy Bush discussing a Days of Our Lives actress they were about to meet up with.

Watch the video to hear Trump say things like:

2) "She's now got the big phony tits and everything."

3) "I better use some tic tacs, just in case I start kissing her. I'm automatically attracted to beautiful [women]. I just start kissing them. It's like a magnet. Just kiss. I don't even wait."

FYI, Trump's statement on the issue is as follows: "This was locker room banter, a private conversation that took place many years ago. Bill Clinton has said far worse to me on the golf course—not even close. I apologize if anyone was offended."

Trump has left so much video showing what a liar he is. There has never been anything like it. https://t.co/AS1GnmWST9

All jokes aside, what Trump is describing is sexual assault and he is a vile, abusive monster. But we knew that already.

This is horrific. We cannot allow this man to become president. https://t.co/RwhW7yeFI2

Jee-zus. I knew Trump was a sexist creep, but I didn't know he was also a mediocre one. Is he D+ at EVERYTHING he attempts? Yuck. https://t.co/vYSNOlUhGr

Donald Trump thinks "when you're a star" you "can do anything" to women? Well you can't make me vote for you, you misogynistic entitled pig.

TRUMP AUDIO "You can do anything to women if you're famous...I just grab her p****" Presidential?

Speechless. America you deserve better than this piece of 💩. https://t.co/DkgGpziupe

Ladies and gentleman, the man who might be president. Also, if you need a laugh:

The media is so after me on women Wow, this is a tough business. Nobody has more respect for women than Donald Trump!