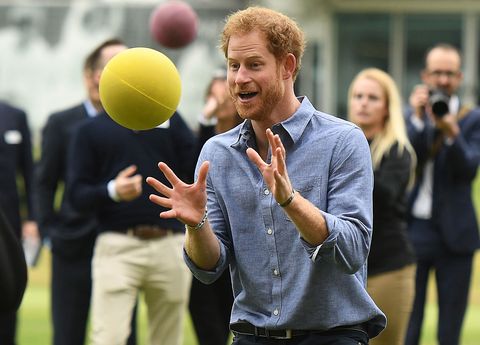 Prince Harry took a break from being proper and royal on Friday to practice drills with the coaching apprentices at Coach Core, the program that, according to People, he launched alongside Prince William and Kate Middleton on the eve of the London Olympics.

"That's quite hard work," he said after participating in a drill with a tennis ball. "I'm dizzy already!"

But don't let Harry's comments fool you; he had the time of his life. How do we know? Because the pictures from the event prove that Prince Harry freaking loves tennis balls. And soccer balls. Basically, Dug from Up is his spirit animal.

Here he is, looking so pleased that his life has brought him here, for this day of play:

Here he is, totally in the moment, experiencing pure glee, because BALLS:

Harry doesn't care if anyone is around. He's just as happy playing on his own.

At one point, Harry decided to double the fun.

His tongue literally wagged with his glee for playing with tennis balls.

He practically twerked with excitement.

Look at that face. Just look.

And if you thought Prince Harry loved tennis balls, that love is nothing compared to his feelings for soccer balls.

Kayleigh Roberts Kayleigh Roberts is the weekend editor at Marie Claire, covering celebrity and entertainment news, from actual royals like Kate Middleton and Meghan Markle to Hollywood royalty, like Katie Holmes and Chrissy Teigen.
This content is created and maintained by a third party, and imported onto this page to help users provide their email addresses. You may be able to find more information about this and similar content at piano.io
Advertisement - Continue Reading Below
More From Celebrity
Meet Simone Biles's Super Supportive Parents
What Happens on Katie's Season?
Advertisement - Continue Reading Below
Bennifer Recreated Their 2002 PDA Moment
Why Harry's Memoir Release Date Has Upset People
The Royals Are Worried About Prince Harry's Memoir
Gabrielle Union Debuted a New, Short Haircut
J.Lo Made Out With Ben on IG for Her 52nd Birthday
Harry Is Putting the Queen in a Difficult Position
Are Will & Kate Sending a Message to Harry & Meg?
Harry and Meghan Reportedly Have a Four-Book Deal