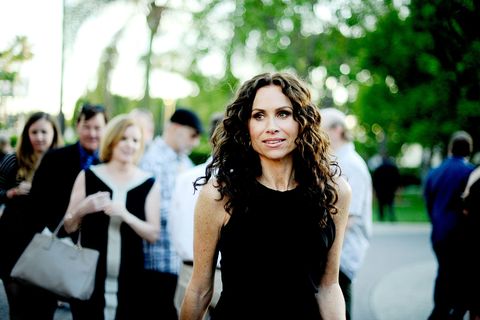 It's been less than a week since leaked tapes of Donald Trump casually chatting about "pussy grabbing" surfaced, so now is 1,000,000,000 percent the time to remind men like him that violence against women is an actual (and completely un-funny) issue. In fact, not only did Amber Tamblyn recently open up about her horrifying experience with vaginal assault, Minnie Driver just recounted being attacked by a stranger when she was a teen.

"This guy came, and he kind of elbow grabbed me and he said, 'You're going to dance with me,'" Driver recalled during an appearance on SiriusXM's StandUP! with Pete Dominick. "And I said, 'No.' And I pulled my arm away from him and he grabbed me by the back of my hair and I tried to kick him and he punched me."

"Unwanted male attention is something that you're supposed to put up with, because it is somehow your role that a guy can come and touch you."

This is horrible, but equally depressing is the fact that police shamed Driver for the attack:

"The way they presented it was, this guy was just having a good time and if you'd gone along with it, it would have been fine," she said. "If you'd just danced with him, you wouldn't be in this position that you're in now. And I think that's the way it's framed for most young women. When you're 17, 18, you're going out, the idea of unwanted male attention is something that you're supposed to put up with because it is somehow your role that a guy can come and touch you. He can put his hand way too far down the small of your back so that his hand is kind of going into your butt and that that's alright. That you can be shepherded, herded, touched, mauled. I think young women have been belittled when they've said something. I remember getting called a 'prude.'"

Listen to Driver's full story below, and feel free to share it with anyone who downplays this type of behavior in your life.