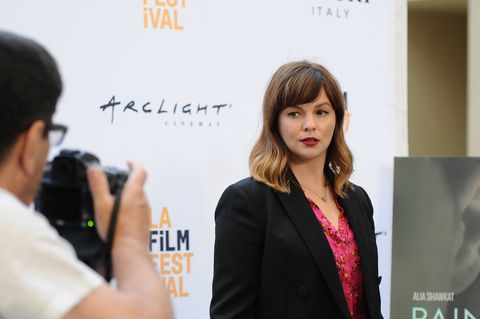 Leaked tapes of Donald Trump were released on Friday, and while many are offended by him hitting on a married woman, the real problem here is Trump bragging about sexual violence. Because make no mistake, grabbing women by the "pussy" is 100 percent assault.

"When you're a star, they let you do it," Trump says during the circa 2005 leaked conversation with Billy Bush. "You can do anything...grab 'em by the pussy."

The thing is, this isn't just "locker room" talk. Unwanted vaginal "grabbing" is a real thing that happens to real women, including Amber Tamblyn. The actress opened up about her experience with sexual assault in a lengthy Instagram post, explaining that she was at a party when her ex-boyfriend came up to her, grabbed her hair, grabbed her genitals, and carried her out of a show in front of her friends. She was bruised for an entire week after.

"That part of my body, which the current Presidential Nominee of the United States Donald Trump recently described as something he'd like to grab a woman by, was bruised from my ex-boyfriend's violence for at least the next week," Tamblyn writes in the below post. "To this day I remember that moment. I remember the shame. I am afraid my mom will read this post. I'm even more afraid that my father could ever know this story. That it would break his heart. I couldn't take that. But you understand, don't you? I needed to tell a story. Enjoy the debates tonight."

Donald Trump told Anderson Cooper that he's never actually assaulted a woman, but his comments lend disturbing credence to the many men who do treat women's bodies in this appalling way.