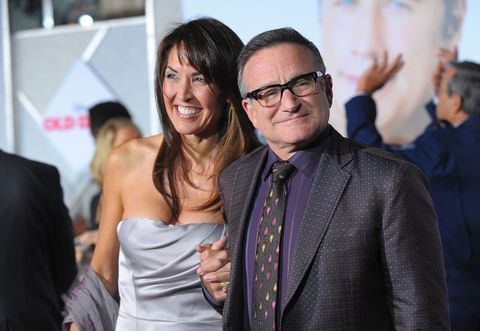 Robin Williams' wife Susan Williams just delivered an emotional speech about her husband's battle with Lewy Body Disease, and it can only be described as heart-rending. Most of the speech focused on the comedian's love for entertaining the troops (she accepted a posthumous award from the USO on his behalf), but Susan also spoke at length about her husband's perseverance.

"The biggest battle of his life was against Lewy Body Disease. This terrifying disease attacks the brain. No matter how many doctors we saw, symptoms we chased, or tests we ran, it was only in autopsy that I learned we had unknowingly been battling a deadly disease. A disease for which there is no cure. The devastation on Robin's brain from the Lewy bodies, was one of the worst cases medical professionals have ever seen. Yet throughout all of this, his heart remained strong."

Susan went on to draw parallels between Robin's journey and that of a soldier's, saying: "Robin may have lost his battle here against LBD. But he did not lose the war. No, he's not done yet. The way I see it, he has brought the light of dawn to a new mission for all of us. That mission is to eradicate brain disease. I feel as though I am his boots on the ground now—I look up and know I am not alone."

In a particularly emotional moment, Susan revealed that it was her wedding anniversary, and said, "It feels like Robin wanted me here on this day to celebrate with all of you, with our best man Bobcat Goldthwait, and with our maid of honor Jean Horn. I also think my honey may have wanted me to put on a pretty dress and to just feel the love in this room tonight."

Mehera Bonner Contributor Mehera Bonner is a news writer who focuses on celebrities and royals.
This content is created and maintained by a third party, and imported onto this page to help users provide their email addresses. You may be able to find more information about this and similar content at piano.io
Advertisement - Continue Reading Below
More From Celebrity
Princess Eugenie's Son Got to Meet Prince Philip
Ashley Graham Is Having Twin Boys
Advertisement - Continue Reading Below
Gabrielle Union Danced Topless at a Window
Ben Affleck Is "in Awe" of Jennifer Lopez
Princess Beatrice Has Given Birth to a Baby Girl
Gigi Hadid's Mom Shared Sweet Pics of Khai
Kate & Will Probably Won't Have a Fourth Child
Ben & Jen Plan to Spend the Holidays Together
Kate & Will Are "Anxious" About Harry & Meghan
Mandy Moore Calls Breast Pump Emmy's MVP Accessory