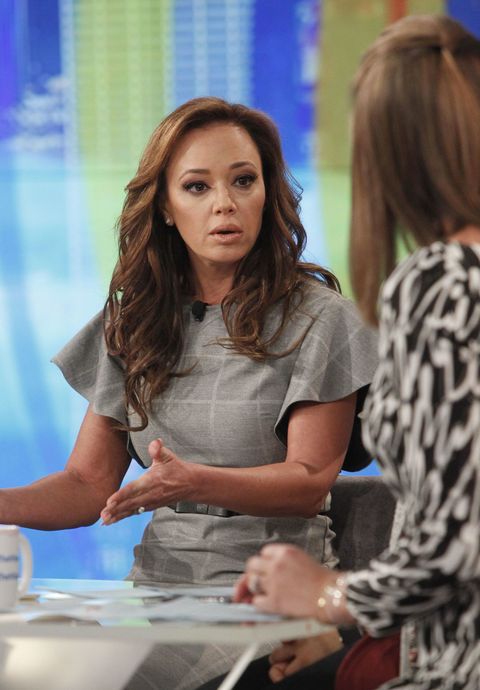 King of Queens actress Leah Remini has been outspoken lately about her life inside the Church of Scientology and her extremely public decision to leave. And now her new series about former members of the secretive church looks like the most addictive thing on TV since Going Clear.

Leah Remini: Scientology and the Aftermath will take the form of an eight-episode docuseries on A&E. Remini, who is also serving as executive producer, will go in front of the camera to interview Scientology executives and church members. The show will discuss the abuse and harassment that these former Scientologists have faced since speaking out.

The first trailer is a heartfelt and goosebump-inducing look at the people Scientology has affected. Remini references "abuses" and even "abortions" forced by the church, as former members discuss what the group did to their families. She described why she took on the project in a scathing statement:

"This series is about sharing the truth about Scientology. Truth born out of very personal experiences. Truth that is shocking, things I did not expect to find when I embarked on the journey of making these shows. For too long, this multi-billion-dollar organization bullied victims and journalists to prevent the truth being told. It is my hope that we shed light on information that makes the world aware of what is really going on and encourages others to speak up so the abuses can be ended forever. I hope that people who have left now feel they have a safe place to go. I hope others who have also experienced abuses will come forward and help us to do something about it. […] Even though I had been a member of the church for a long time, I was stunned by some of the things I learned. There is a lot more to this story than anyone knows. And this series is breaking ground in bringing that information to light."

The show premieres on November 29 at 10 p.m. Eastern and Pacific time. Watch the first trailer below:

Update, 11/3: The Church of Scientology has issued a statement about Remini's new show:

"Desperate for attention with an acting career stuck in a nearly decade-long tailspin, Leah Remini needs to move on with her life. Instead, she seeks publicity by maliciously spreading lies about the Church using the same handful of bitter zealots who were kicked out years ago for chronic dishonesty and corruption and whose false claims the Church refuted years ago, including through judicial decisions."

This content is created and maintained by a third party, and imported onto this page to help users provide their email addresses. You may be able to find more information about this and similar content at piano.io
Advertisement - Continue Reading Below
More From Celebrity
Harry Met With the Queen At Least Twice in the U.K
Alexis Is Happy to Be Known As "Serena's Husband"
Advertisement - Continue Reading Below
Marc Anthony Supports J.Lo Amid A-Rod Split
The Palace Just Shared Prince Louis Birthday Pic
Meghan and Harry Talked Every Day During UK Trip
J.Lo Wishes A-Rod's Daughter a Happy Birthday
Irina Shayk Shared a Rare Photo of Her Daughter
John Travolta Talked Dancing With Princess Diana
Meghan Markle and Archie Speak to the Queen
Who Is Alexandria Ocasio-Cortez's Partner?