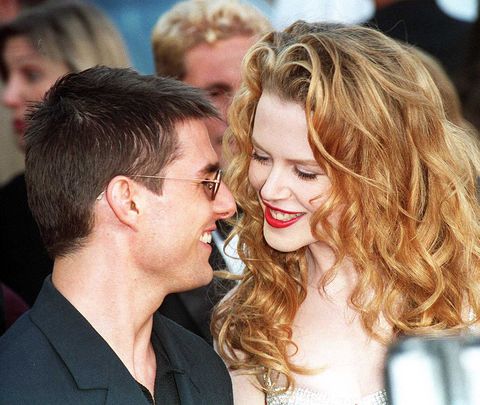 On Sunday, we'll finally get to see the much anticipated documentary Going Clear: Scientology and the Prison of Belief by Oscar winner Alex Gibney—based on the 2013 book by Pulitzer Prize-winning journalist Lawrence Wright—that takes a look behind the curtain of Scientology. It premiered at the Sundance Film Festival earlier this year, and features self-proclaimed Scientology defectors who are interviewed about their time in the Church. And to say it's controversial is a bit of an understatement.

The documentary has ex-members making some pretty bold claims about the Church—many who had been practicing for decades. Marty Rathburn, who spent years as the leader David Miscavige's right-hand man, speaks out, as does writer and director Paul Haggis, who left the Church after 35 years.

Here are five things you must know before watching the documentary on Sunday:

The religion was allegedly created by L. Ron Hubbard because his books were failing.

Those who speak in the documentary say that the main reason Hubbard founded the religion was to bolster his declining sci-fi book sales.

It's allegedly the reason for Tom Cruise and Nicole Kidman's split

One of the biggest claims of the film is that the Church of Scientology pressured Cruise to split with Kidman because they were suspicious of her father, a prominent psychologist. Her father's position put Kidman on the "Potential Trouble Source" list, which the church says is for people "who are in some way connected to and being adversely affected by a suppressive person."

John Travolta is allegedly being blackmailed into staying with the religion.

The founder of Scientology, L. Ron Hubbard, created a confession-like ritual called the "audit" in which the religion is primarily centered around. Essentially, a member confesses their secrets and traumatic experiences that the auditor records. In the documentary, however, the audit is said to be used as blackmail to keep members from leaving—and is the major reason that John Travolta has remained a Scientologist, as the doc claims that he wants to keep his true sexuality in the closet.

Members are allegedly subjected to abuse and not paid a fair wage.

Former members told Gibney and Wright that the leader of the Church, Miscavige, physically beat others and also incarcerated them in trailers on their property of the main church. Workers are also paid $.06 to $.40 an hour.

The Church of Scientology has denounced the documentary as a "bigoted propaganda piece."

In a letter to The Hollywood Reporter, Church of Scientology spokesperson Karin Pouw writes that the doc "racks up more falsehoods, errors, embellished tales and blatant omissions than were committed by Rolling Stone, Brian Williams and Bill O'Reilly combined. By our calculation, the film on average includes at least one major error every two minutes."

Catch Going Clear: Scientology and the Prison of Belief on HBO this Sunday March 29 at 8 p.m. EST.

How I Fled a Life of Polygamy