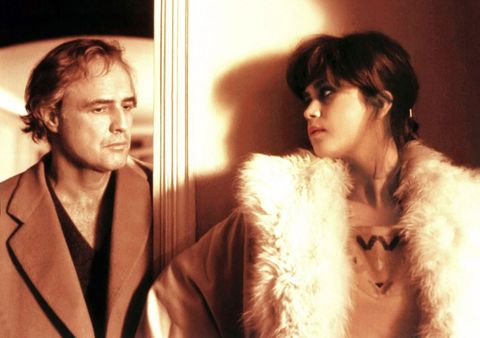 "The sequence of the butter is an idea that I had with Marlon in the morning before shooting it," Bertolucci says in the above interview. "But I'd been—in a way—horrible to Maria because I didn't tell her what was going on. Because I wanted her reaction as a girl not as an actress. I wanted her to react [so] she felt humiliated. If it goes on she shot 'no, no!'"

Umm...in "a way" this was horrible? Bertolucci "wanted" her to act humiliated? There are truly no words for how completely horrific and utterly shameful this revelation is.

"I think she hated me and also Marlon," Bertolucci continued. "Because we didn't tell her that there was this, that detail of the butter used as lubricant. I feel very guilty for that. I feel guilty but I do not regret."

Schneider passed away in 2011, but in 2007 she told the Daily Mail she felt as though she was raped. "Marlon said to me: 'Maria, don't worry, it's just a movie,' but during the scene, even though what Marlon was doing wasn't real, I was crying real tears," she said. "I felt humiliated and to be honest, I felt a little raped, both by Marlon and by Bertolucci. After the scene, Marlon didn't console me or apologize. Thankfully, there was just one take."

Meanwhile, Bertolucci had this to say: "To obtain something I think you have to be completely free. I didn't want Maria to act her humiliation her rage, I wanted her to, Maria to feel—not to act—the rage and humiliation. Then she hated me for all of her life."

For confidential and free support about rape or sexual assault, contact the National Sexual Assault Hotline 24/7 at 800.656.HOPE. You can also IM anonymously at online.rainn.org.

Mehera Bonner Contributor Mehera Bonner is a news writer who focuses on celebrities and royals—follow her on Instagram.
This content is created and maintained by a third party, and imported onto this page to help users provide their email addresses. You may be able to find more information about this and similar content at piano.io
Advertisement - Continue Reading Below
More From Celebrity
Serena Williams Signed a Major TV Deal With Amazon
Chrissy Wrote Luna the Sweetest Birthday Message
Advertisement - Continue Reading Below
Prince Harry Has Met Princess Eugenie's Son August
The Queen Returns to Work After Philip's Death
A Brief History Lesson on Brad and Jen
Rihanna and A$AP Were Spotted on a Date
Prince Harry Is "Really Missing" Meghan Markle
J.Lo and A-Rod Are "Completely Back On"
Chrissy Shared the Cutest Photo of Luna and Miles
Gaga Stuns in a Wedding Dress for 'House of Gucci'