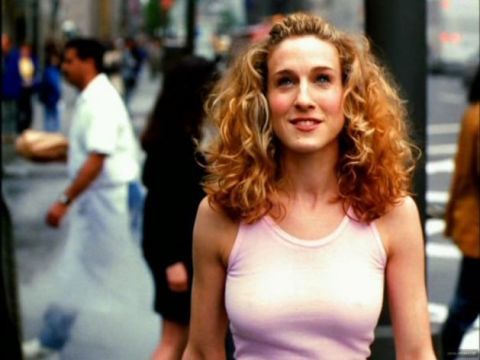 Of all of the fabulous outfits that Carrie wore on Sex and the City, one of the most iconic ones must be the famed tulle tutu that gets splashed in the opening credits.

But according to an Entertainment Weekly exclusive, Carrie originally had a very different outfit on in the credits–a '50s style blue dress that is at once classic and racy, just like the show. And instead of getting splashed by the bus carrying an ad for her newspaper column, she trips when she sees it, then walks it off with her trademark confidence.

"There were two wardrobes. One was the tutu, and we did one pass where Sarah Jessica was wearing a blue dress and didn't get splashed; instead, she trips when she sees the ad," creator Darren Startold EW of filming the credits in March 1998 by the Plaza Hotel. "In my mind, it was a nod to The Dick Van Dyke show, but we didn't use it. It's in the archives."

Costume designer Patricia Field famously found the tutu in a $5 bin on a showroom floor and recreated four version of it.

"Sarah Jessica and I were fighting for it, and Darren said, 'Okay, but I want other outfits as possibilities,'" she said.

Ultimately, Star conceded, and it's a good thing he did because it was a perfect metaphor for the show and her character: wacky, elegant, fun, and totally original.

"It was such a brilliant choice because, in a way, Carrie's dancing through her life in New York," he said.

We never got to see her wear the outfit on the actual show, but the tutu made a special appearance when Carrie is cleaning out her closet in the first Sex and the City film.

This content is created and maintained by a third party, and imported onto this page to help users provide their email addresses. You may be able to find more information about this and similar content at piano.io
Advertisement - Continue Reading Below
More From Celebrity
Ariana Grande Got Married Over the Weekend
Ariana Grande Quietly Married Dalton Gomez
Advertisement - Continue Reading Below
Joie de Tracee
Jennifer Lopez and Ben Affleck: Everything We Know
Harry & Oprah's Mental Health Doc Has a Title
Serena Williams Might Miss the Tokyo Olympics
Jennifer and Ben Have "Unreal" Chemistry Together
The Sussexes Marked Archie's Bday in a Lovely Way
Queen's Cousin Accused of Selling Access to Putin
Meghan Wore a Meaningful Necklace for Vax Live