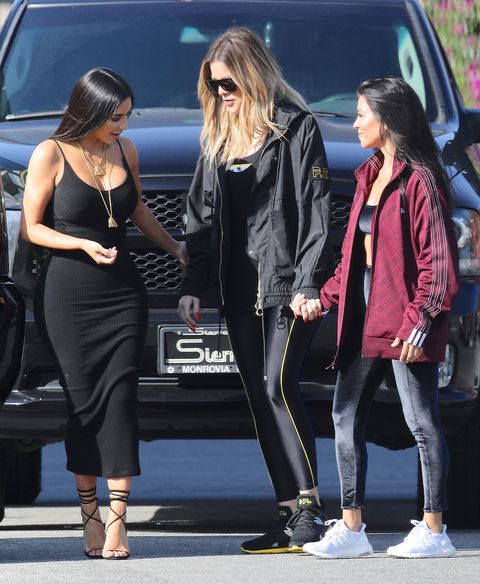 A future episode of Keeping Up with the Kardashians will be about more than just family drama. Instead, it'll be promoting an important cause for women everywhere. TMZ reports that Kim, Khloe, and Kourtney all visited a West Los Angeles Planned Parenthood on Thursday, and cameras were there filming for their E! reality show.

While they were there, they reportedly spoke with leaders about women's healthcare and the threat of the Trump administration. And the sisters asked what they can do to help them out in the future. (Chances are, putting them on a popular reality show doesn't hurt.)

In paparazzi photos, the three are seen holding hands and walking in together. They're also shown meeting with staffers outside the building.

According to X17 Online, the sisters wanted to use their platform to make a difference. "The girls felt that since they have such a huge audience, they could really make a difference and shed some light on just how important Planned Parenthood is for those who can't afford the services they provide elsewhere," a source told the site.

Whether or not you're a fan of the Kardashian family, this is a pretty standout way to speak out. And they were silent when paparazzi asked Kim if this was a statement, but come on. It totally is, and that's awesome.

This content is created and maintained by a third party, and imported onto this page to help users provide their email addresses. You may be able to find more information about this and similar content at piano.io
Advertisement - Continue Reading Below
More From Celebrity
Prince Harry Doesn't Regret His Oprah Interview
Archie Has a Distinct American Accent, Apparently
Advertisement - Continue Reading Below
Hailey Wore a Nude Blazer and Micro Dress
Gabrielle's TikTok About Her Prom Date is So Funny
Victoria Beckham Shuts Down 'Spice World 2' Rumors
Kendall Jenner Shared Her Experience of Anxiety
'The Voice' Star Blake Shelton Opens Up About Gwen
Sussexes Share New Birthday Photo of Archie
Charles Is Still Upset Over Harry's Oprah Tell-All
Meghan and Harry Share New Archie Photo