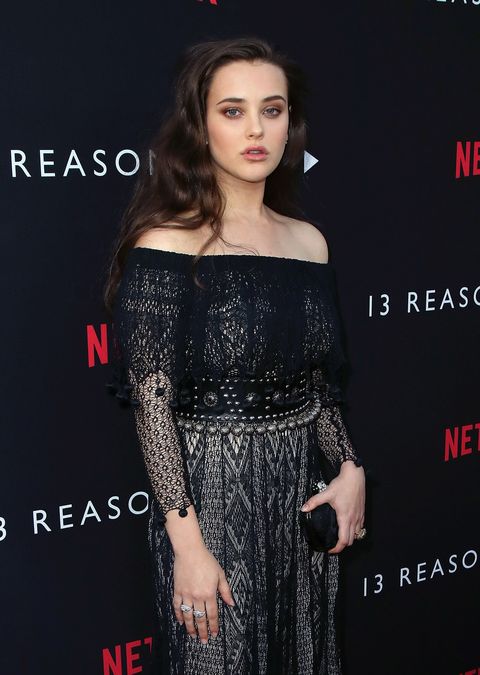 Netflix's adaptation of 13 Reasons Why has been as controversial as it's been popular. While many young adults have embraced the series, which deals with difficult issues like bullying, sexual assault, and suicide, several mental health experts have expressed concerns that the series romanticizes suicide and self-harm.

The filmmakers and executive producer Selena Gomez have spoken out in defense of the series, and now Katherine Langford, who stars as Hannah Baker, a teen who dies by suicide and records tapes for the people she sees as responsible for the circumstances that led to her death, has done the same.

In an interview on The Tonight Show Starring Jimmy Fallon, Langford got very candid about the backlash against 13 Reasons Why.

"Of course there's controversy," she said. "I think things like these instigate discussion, which is the important part. And I think we cover so many important issues in the show that are going to affect people differently depending on their own personal context."

"And I'm like everyone's feelings are valid, so I'm not going to tell anyone to feel anything differently, but personally being directly involved in the show and seeing the thought and consideration that went into it...Also being a young adult, playing a young adult and covering issues that are relevant, I feel really proud of the way we covered it and the way we showed things," she explained.

She added that, since starring in the series, she's put links to 13reasonswhy.info and itsonus.org in her Instagram bio, in the hopes that fans who have more questions about the issues raised on the show will make use of those resources.

Kayleigh Roberts Kayleigh Roberts is the weekend editor at Marie Claire, covering celebrity and entertainment news, from actual royals like Kate Middleton and Meghan Markle to Hollywood royalty, like Katie Holmes and Chrissy Teigen.
This content is created and maintained by a third party, and imported onto this page to help users provide their email addresses. You may be able to find more information about this and similar content at piano.io
Advertisement - Continue Reading Below
More From Celebrity
Matthew Perry Deletes 'Friends' Reunion Instagram
Charles is Looking Forward to Seeing Harry Again
Advertisement - Continue Reading Below
Will & Harry to Walk Together at Philip's Funeral
Beyoncé Wore Tweed Micro Shorts for Date Night
Kristen Stewart's GF Gushed About Her on Insta
Prince Charles Addresses Prince Philip's Death
Prince William Pulls Out of 2021 BAFTA Appearances
J.Lo Wears a Crop Top and Gold Joggers on Set
Prince Philip Said He Had No Desire to Live to 100
JT Is in the Throwback Pic Britney Posted on IG