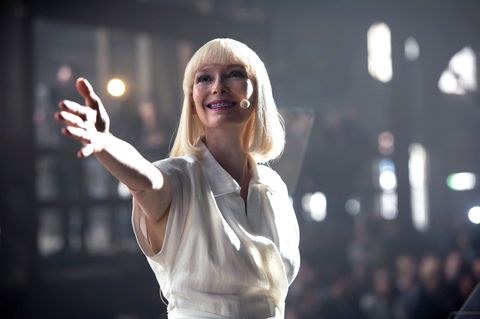 If you were to create mood board for the antagonist in a political satire about a friendship between a young girl and a hippo-like creature named Okja, you would probably be more likely to think Scar of Lion King fame than...Ivanka Trump. But this is why we pay Tilda Swinton the big bucks—to make that connection while throwing shade at a certain unnamed heir to "a rotten great fortune built on the corrupt and morally repugnant initiatives carried out by her father." (Can you say "complicit" again?)

In an interview with The Wrap, everybody's favorite earthbound elfin alien explained the inspiration behind her character Lucy Mirando in Okja, head of the evil corporation that genetically engineers the titular animal.

"When we shot in New York last summer, I stood watching the Republican convention on the television in our lunch break dressed as Lucy, watching a different daughter of a different dubious dynasty addressing, from a high podium, a big crowd with glossy blond hair, expensive orthodontics and modeling her Barbie-perfect modest pink dress (concurrently on sale online). Chicken? Egg?"

Ohmygoodness. At least there's no doubt about one thing: Tilda is queen.

Chelsea Peng I'm Chelsea Peng, the assistant editor at MarieClaire.com.
This content is created and maintained by a third party, and imported onto this page to help users provide their email addresses. You may be able to find more information about this and similar content at piano.io
Advertisement - Continue Reading Below
More From Celebrity
Lilibet May Be Christened in California After All
The Sweet Family Photos in Prince William's Office
Advertisement - Continue Reading Below
Royal Family Members Can’t Eat Pasta or Potatoes
Prince George Is an Environmentalist, Too
Salma Hayek Looked Super Hot in Leopard Print
Britney Spears Just Trolled Justin Timberlake
Billie Eilish Says Kate and Will Were "So Normal"
Prince William Slammed Billionaires' "Space Race"
Lady Gaga Draped Herself in $100 Bills
Kate Middleton Wore Green to Celebrate Nature