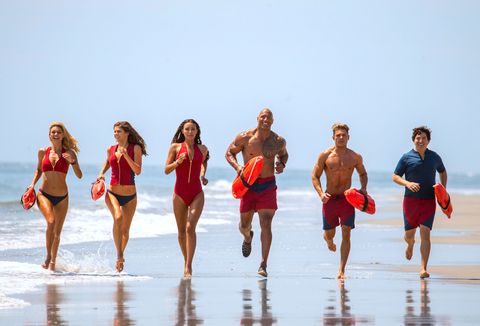 Baywatch is officially here to distract you from the general WTF-ness of 2017, and while you'll have to decide for yourself if it lives up to the original, one thing is indisputable: the iconic red suit looks better than ever.

MarieClaire.com spoke with designer Dayna Pink about recreating what might be the most famous piece of swimwear in history, working with butt glue (yes, it's a thing), and what Zac Efron and Dwayne "The Rock" Johnson wore under their swimming trunks...if anything.

On Dwayne's Jockstrap and Zac's Speedo

"Zac had a speedo on underneath his swimming trunks because his character is an ex-Olympian, but Dwayne did wear something athletic underneath. He had an 'athletic piece,' and you can even see peaks of it in some of the shots. It was more about aesthetics. We could of course build in whatever we wanted to build in, but it was an aesthetic decision on the part of both of them."

On Using (Wait for It) Butt Glue

"We used butt glue. I *think* it's called Bikini Butt—it's a roll-on that keeps your swimsuit in place. We didn't have to do anything major—the swimsuits didn't need a ton—but if you're running and you don't want to think about it, we had this Bikini Butt that kept everything glued down in place where it needed to be."

On Designing with Breasts (Running in Slow Motion, No Less) in Mind

"These girls, their bodies are so beautiful. If we were going to have to add support, we could—but the fabric itself is supportive. It did everything it needed to do. The way we built them added some support. But with Kelly Rohrbach running down the beach, we're good. We're gonna put it in slow-motion, and she's gonna look great."

"The suit is so important as a piece of history, so you have to respect that, but also modernize it. We researched trends in swimwear—I eventually was like 'let's talk about a zipper.' The long sleeves came in from contemporary scuba trends—and I happen to think they're really sexy. Sometimes, what you cover up can be just as sexy as what you show if you do it right. We're showing shape. We also did one suit that's a vest, which is very active wear inspired. We did a bikini which hasn't been done before either, but it's not some tiny string bikini—it's solid. If she had to save someone wearing that bikini, she could."

On Why Zac and Dwayne Didn't Wear Short-Shorts

"The original Baywatch shorts were shorter, and both of these guys can handle a short short. But what looks best to the eye is a little longer. I didn't adhere to much other than what appealed to me. We wanted it to look fantastic. I didn't want the length to be distracting."

Mehera Bonner Contributor Mehera Bonner is a news writer who focuses on celebrities and royals.
This content is created and maintained by a third party, and imported onto this page to help users provide their email addresses. You may be able to find more information about this and similar content at piano.io
Advertisement - Continue Reading Below
More From Celebrity
The Queen Displayed a Rare Photo of the Sussexes
Justin Backs Britney After Conservatorship Hearing
Advertisement - Continue Reading Below
Jen Aniston Said a Male 'Friends' Star Was Rude
Jennifer Aniston on "Silly" Love Life Speculation
People Are Devastated by Britney's Revelations
Britney Spears on "Abusive" Conservatorship
'Too Hot to Handle' S2 Was Filmed In Paradise
About That "Sexy Nerd" From 'Too Hot to Handle'
Prince Charles Is Leaving London When Harry Visits
What Happens on Katie's Season?