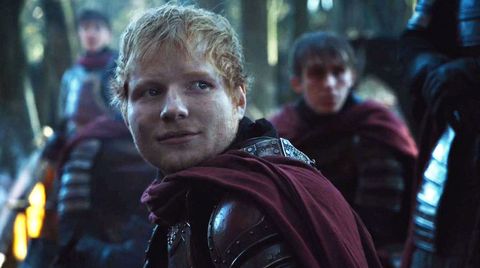 We didn't have to wait long for Ed Sheeran's highly-anticipated Game of Thrones cameo. The singer appeared in an entire scene in tonight's premiere.

Sheeran shared the screen with Arya Stark, which is something we've known for a while—showrunners David Benioff and D.B. Weiss said they gave him a role on the show for Maisie Williams, who plays Arya.

In the scene, Arya comes across a group of Lannister soldiers who are all harmonizing together around a campfire, you know, as soldiers do. As promised, Arya's first words to onscreen Ed were, "Oh, that's a nice song."

The scene itself is actually worthwhile—the Lannister soldiers are all very nice to Arya, sharing their roasted squirrel and homemade wine with her and generally respecting her as a human being, which is a nice change of pace for the treatment of a woman in Westeros. It humanizes the Lannister army for Arya, who had fallen deep down a revenge spiral and was ready to basically obliterate anyone with a Lion on their sigil.

The scene was also overshadowed by the ginger elephant in the room, however. It's impossible to watch the moment and think much other than, "Wow, that is Ed Sheeran, sitting in Westeros. Ed freaking Sheeran got to be in an episode of Game of Thrones. And not in a blink-and-you-miss-it cameo. In a blink-several-times-and-he's-STILL-there-speaking-multiple-lines-of-dialogue cameo. Wow. Oh, also Arya and some potentially important character development...nope, still thinking about Ed Sheeran."

Also, when we leave Arya, she's still with Ed Lannister, so this could be a MULTI-EPISODE ARC, people. Probably (okay, hopefully) not—but it's possible.

Kayleigh Roberts Kayleigh Roberts is the weekend editor at Cosmo, focused on celebrity news and royals.
This content is created and maintained by a third party, and imported onto this page to help users provide their email addresses. You may be able to find more information about this and similar content at piano.io
Advertisement - Continue Reading Below
More From Celebrity
Prince Charles Shares Final Exchange With Philip
William and Kate's Children Just Love Airplanes
Advertisement - Continue Reading Below
Jennifer Aniston Answered Bizarre Fan Questions
Prince Charles "Really Wants to Meet" Lilibet
Britney Spears Deleted Her Instagram Account
Megan Fox Won't Be Told "What a Woman Should Be"
Jennifer Garner Shared an Emotional Message on IG
Travis Scott Discussed His Parenting Style
Kanye West Unfollowed Kim Kardashian on Instagram
Kate Hudson Is Engaged to Danny Fujikawa