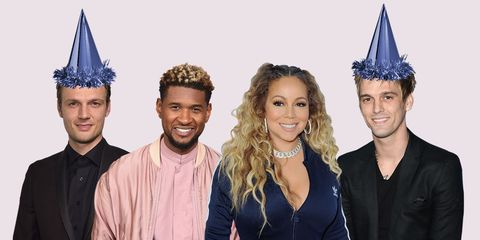 This week in petty...brother vs. brother, alleged STDs, O.J., and Mariah Carey doing the least but simultaneously the most. Welcome to the Petty Party, which is like the Skimm but with nothing of substance you could use to sound smart in front of your colleagues. (Plenty of water-cooler fodder, though.)

After his arrest for DUI and drug possession, Aaron Carter released a statement in which he referred to himself in the third person and dragged his brother Nick for failing to reach out. Siblings accusing each other of neglect is always very sad-making, but this must be included in this edition of PP because of the use of "my own blood (Nick)." May they be able to resolve their issues not on social media.

When the Internet Learned That O.J. Would Once Again Go Free

You know people had held meetings and compiled folders of suitable images and references—all before the parole board even voted to release O.J. in October.

When the Internet Found Out About Usher's, Uh, Diagnosis

Crude but effective. In documents published Wednesday, Usher allegedly paid $1.1 million to settle a lawsuit with a stylist who claimed the pop star infected her with herpes. There is mention of sores and "greenish discharge."

When Mariah Carey Was You at Any Group Fitness Class

Definitely did not turn up the resistance. Definitely did not squat down far enough. But the difference is she got paid, while you *lost* money trying to dodge the cancellation fee but not actually trying hard enough for the exercise to make a difference.

Chelsea Peng I'm Chelsea Peng, the assistant editor at MarieClaire.com.
This content is created and maintained by a third party, and imported onto this page to help users provide their email addresses. You may be able to find more information about this and similar content at piano.io
Advertisement - Continue Reading Below
More From Celebrity
This Is Dax and Kristen's Approach to the Sex Talk
Angelina Jolie Dodged a Question About The Weeknd
Advertisement - Continue Reading Below
Kourtney and Travis Want a "Destination Wedding"
Harry Panicked About the Queen's Hospital Stay
Olivia Munn Doesn't Care About "Settling Down"
These 83 Twitter Accounts Harass Meghan Markle
Adele's Ex Came to a Special Taping of Her Album
Kristen Stewart on a "Spooky" Moment Playing Diana
Travis Covered His Ex' Name With Tattoo for Kourt
Kendall Jenner Wore a Bedazzled Pink Cowboy Hat