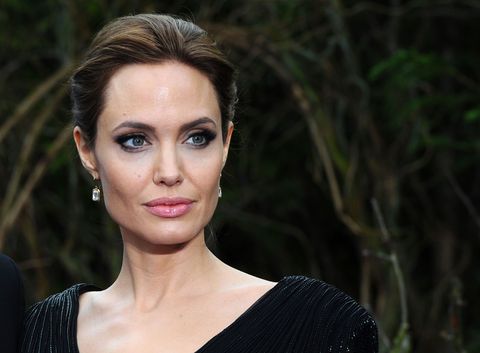 Angelina Jolie's new movie, First They Killed My Father, is making headlines for the wrong reasons this week.

A new Vanity Fair profile of the actress details the process of auditioning Cambodian children for the lead role of Loung Ung, saying that Jolie looked at "orphanages, circuses, and slum schools, specifically seeking children who had experienced hardship." Then, in the audition, casting directors allegedly placed money on a table, asked the children what they needed the money for, and then took it away to get a reaction from them. The casting director would then pretend to "catch" the children and instruct them to come up with a lie.

"Srey Moch [the girl ultimately chosen for the part] was the only child that stared at the money for a very, very long time," Jolie explained. "When she was forced to give it back, she became overwhelmed with emotion. All these different things came flooding back. When she was asked later what the money was for, she said her grandfather had died, and they didn't have enough money for a nice funeral."

Critics of the casting process found it cruel and emotionally abusive.

Angelina Jolie is crazy. What a cruel psychological game to play with impoverished children. pic.twitter.com/iAEUhINBui

Jolie responded to the controversy in a statement to the Huffington Post:

"Every measure was taken to ensure the safety, comfort and well-being of the children on the film starting from the auditions through production to the present. I am upset that a pretend exercise in an improvisation, from an actual scene in the film, has been written about as if it was a real scenario. The suggestion that real money was taken from a child during an audition is false and upsetting. I would be outraged myself if this had happened."

Kayleigh Roberts Kayleigh Roberts is the weekend editor at Marie Claire, covering celebrity and entertainment news, from actual royals like Kate Middleton and Meghan Markle to Hollywood royalty, like Katie Holmes and Chrissy Teigen.
This content is created and maintained by a third party, and imported onto this page to help users provide their email addresses. You may be able to find more information about this and similar content at piano.io
Advertisement - Continue Reading Below
More From Celebrity
There's Drama Over Prince Harry's Funeral Attire
Jennifer's Rep Breaks Silence on Adoption Story
Advertisement - Continue Reading Below
Princess Eugenie's Prince Philip Tribute
Serena Williams Signed a Major TV Deal With Amazon
Chrissy Wrote Luna the Sweetest Birthday Message
Prince Harry Has Met Princess Eugenie's Son August
The Queen Returns to Work After Philip's Death
A Brief History Lesson on Brad and Jen
Rihanna and A$AP Were Spotted on a Date
Prince Harry Is "Really Missing" Meghan Markle