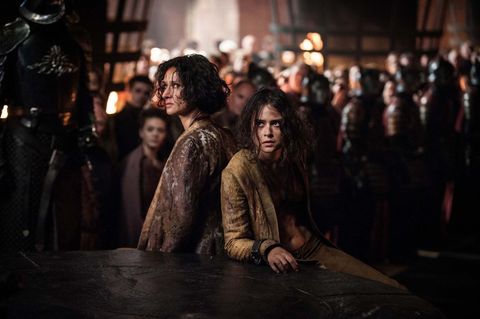 Game of Thrones is known for being ruthless with its characters and Season 7 has already seen several fan favorites meet their doom. This season's third episode, "The Queen's Justice," was particularly brutal, with the loss of Olenna Tyrell, as well as Ellaria and Tyene Sand.

Although all three deaths (/impending death following years of torture) took place offscreen, the actress who plays Ellaria (ironically, the one character who is certainly still alive—and will be for years if Cersei has her way), promises that even though her character's demise wasn't seen on screen, fans shouldn't expect her return.

"[Showrunners David Benioff and Dan Weiss] called me, but I kind of knew already," she told Entertainment Weekly of learning her character's fate. "Obviously there's lots of trimming going on. It's all coming to a head and you have to get rid of less important characters that the audience hasn't had the chance to invest in as much. So I was expecting it. I wasn't heartbroken. And I was like, 'As long as I die on screen…' and they were like 'Yeah!' But of course I don't die on screen. I stay alive, I'm just not going to reappear. I think it's really clever."

Ellaria doesn't die on screen, as fans know. Instead of killing her, Cersei forced her to witness her daughter's death (Cersei poisoned Tyene exactly as Ellaria poisoned Cersei's daughter, Myrcella), and then sentenced her to live out her days in a cell, watching the body decompose. Of all the dark, dark fates Game of Thrones characters have suffered, Ellaria's is almost certainly the darkest.

Now, we're still waiting for confirmation that Lady Tyrell is really, truly gone (because, TBH, we have to hold out hope that she had the antidote to that poison hidden somewhere close by).

Kayleigh Roberts Kayleigh Roberts is the weekend editor at Marie Claire, covering celebrity and entertainment news, from actual royals like Kate Middleton and Meghan Markle to Hollywood royalty, like Katie Holmes and Chrissy Teigen.
This content is created and maintained by a third party, and imported onto this page to help users provide their email addresses. You may be able to find more information about this and similar content at piano.io
Advertisement - Continue Reading Below
More From Celebrity
Bennifer Recreated Their 2002 PDA Moment
Why Harry's Memoir Release Date Has Upset People
Advertisement - Continue Reading Below
The Royals Are Worried About Prince Harry's Memoir
Gabrielle Union Debuted a New, Short Haircut
J.Lo Made Out With Ben on IG for Her 52nd Birthday
Harry Is Putting the Queen in a Difficult Position
Are Will & Kate Sending a Message to Harry & Meg?
Harry and Meghan Reportedly Have a Four-Book Deal
Naomi Osaka Lit the Olympic Cauldron in Tokyo
John Legend Performed "Imagine" for the Olympics