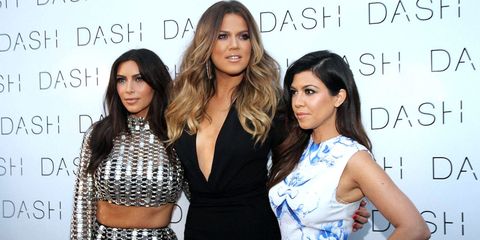 This past Thursday (September 21), the Kardashian-owned store L.A. DASH was held up by a woman who pointed a revolver at an employee. TMZ reports that the woman said, "Stay away from Cuba," knocked a few things over, and left the establishment.

This is Lady who stuck large machete into door of Kardashians clothing shop DASH after waving it at me and other reporters... @CBSLA pic.twitter.com/FD6WENX2pC

The police were called, but at some point the woman is said to have returned to the store and wielded a machete—which she left in the door.

Lady who pointed gun at #DASH store employee this AM apparently returned with a machete. Deputies now actively looking for her. #WeHo pic.twitter.com/pL14SuW8jr

In a disturbing video captured by FOX 11, the woman is heard yelling "The Kardashians will be executed if they step on Communist territory! They'll be f*cking killed!" You can watch a slightly less intense version of events below:

Fortunately, the Kardashians were not in the store at the time of the incident. KTLA reports that the woman has not been apprehended.