There's a good chance you probably know how Battle of the Sexes ends. I certainly did when I sat down for its premiere at the Toronto International Film Festival. But on the off chance that you don't know who took home the win during the infamous tennis match between Billie Jean King and Bobby Riggs, spoiler alert: It was King.

And yet—despite being aware of the outcome—I caught myself quite literally cheering when Emma Stone's King got a point off Steve Carell's Riggs during the big showdown. I actually did a fist pump in the theater as I felt a wave of joy wash over me. You probably will too, because seeing a woman who's fighting for equal rights defeat a self-declared "chauvinist pig" who's exploiting sexism for his own gain is just what everyone needs in 2017. 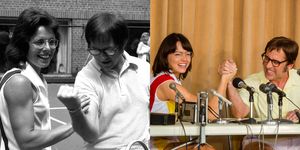 Stone herself has alluded to the fact that King versus Riggs can read a lot like Hillary Clinton versus Donald Trump. And to be honest, after nearly a year of seeing misogyny unequivocally triumph, one of the reasons Battle of the Sexes is so enjoyable is that, for once, it doesn't. Trump might have won the battle in 2017, but King won the battle in this movie. And it's not just escapism. It's a real, true story.

From the outset, King refuses to take any shit from authority figures—so if she's not your role model already, she will be from here on out. She knows her self-worth—and even before Riggs comes along, she's challenging men in power who refuse to pay women even close to what their male counterparts are getting. I would watch an entire GLOW-esque series just about how she enlisted her fellow players into the Women's Tennis Association, especially if it also starred the likes of Sarah Silverman, Natalie Morales, and Bridey Elliott. Silverman, for one, is a chain-smoking, spitfire wonder as the den mother-type Gladys Heldman. Spin-off please!

"King refuses to take any shit from authority figures—so if she's not your role model already, she will be from here on out."

But I'd argue that King's journey is not just about taking a stand. It's also about discovering her own desires after she meets and falls for a hairdresser named Marilyn (played by Andrea Riseborough). King is keenly aware that loving who she wants in public might jeopardize her cause, and Stone's ability to balance her strong-willed personality with the vulnerability of new emotions makes it hard to think of another actress who could play the role. And her casually funny delivery? Just the icing on the cake.

Then there's Riggs, who is a far more intriguing character than his general assholery might initially let on. Carell plays him as a sad sack gambling addict, who doesn't really practice the outspoken sexism that he preaches. Riggs latches onto a movement of angry guys (sound familiar?), using it as publicity for himself and reveling in the sideshow he creates. So, in addition to being enraging, he's pitiful and laughable. Think Michael Scott with a racket—the perfect example of how hatred towards women is just good business for some people.

But cultural relevance and good acting aside, Battle of the Sexes is just flat-out entertaining. It's fitting that directors Valerie Faris and Jonathan Dayton stacked their cast with comedy stars, because they keep the action light-hearted throughout. But, if you're anything like me, Battle Of The Sexes will also be a galvanizing experience. You'll want to applaud when King beats Riggs, and then leave the theater and get to work following in King's footsteps. Nah, you don't have to follow her exact path as a sports champion—that would be nearly impossible—but we'd all do well to live a little more like Billie Jean King.

Battle of the Sexes is currently in theaters.