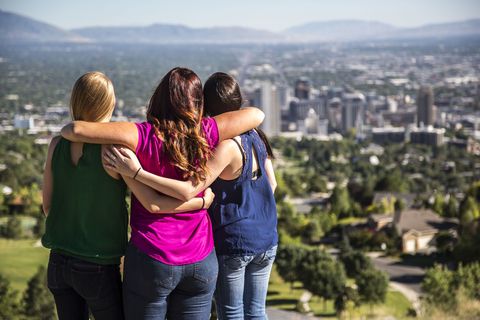 "I couldn't live another day in the Order, so the only options were suicide or out," Jessica, 27, says of her old life. "We love our family and it was so hard to leave them, but we just couldn't survive in that oppression anymore."

The "we" she's referring to is her sister Andrea, 24, and her half-sister Shanell, 24, who are the subject of new LMN docuseries Escaping Polygamy. Despite a horrific past, the three consider themselves lucky—they were able to break out of a life of constant beatings and forced marriage to their uncles and cousins, and are now trying to help the other women they left behind.

All three were raised in the Order, or the Kingston Group, a secretive, polygamous splinter organization of Mormon fundamentalists. They split off from the church around the 1920s, and in 2004, the Salt Lake Tribune reported it as a "$150 million business empire" with some 1,200 members.

"The Church has nothing whatever to do with those practicing polygamy," said Gordon B. Hinckley, then-president of the Church of Jesus Christ of Latter-day Saints, in a statement in 1998. "If any of our members are found to be practicing plural marriage, they are excommunicated, the most serious penalty the Church can impose." Such is the official word from the Mormon church, as it has been since 1890. Of course, that doesn't mean polygamy doesn't exist—or that its practitioners don't go rogue in even more drastic ways.

At 14, Jessica was in the process of becoming a third wife to her 42-year-old uncle. But during their engagement, another family member helped her and little sister Andrea escape. She may have eluded the marriage, but not the "inappropriate relationship" she says her uncle had with her.

"They love their blood. They think they're direct descendants of Christ," Jessica says of the Kingston family. "And they think their blood is pure. It's almost like they want to have purebred Kingstons. They're trying to get that, so they're having Kingstons marry Kingstons." One of her relatives is currently training to become a geneticist, she says, to test for recessive genes and avoid the birth defects that occur in the group.

"They love their blood. They think they're direct descendants of Christ."

All those wives and children make up a large workforce for the order's businesses, which include farming, construction, cleaning, and more. "I started working when I was about eight years old," says Jessica. She has a needle embedded in her finger from an industrial sewing machine, a memento of one job. She then moved on to butchery. "I wasn't living at home, I was sent away to live somewhere else, and I was slaughtering cows. I was 15 at the time," Jessica says. Andrea, who is now pursuing a degree in public-service law, started working at age nine, cleaning an office building after school.

"You don't make minimum wage, you make whatever your dad says you're going to make," Andrea says. "And this is for everybody, not just the eight-year-olds. The money that you make working at the businesses does not come to you in the form of a paycheck. It comes to you each month in the form of a bank statement that says you have certain units. So it's not even U.S. dollars." If you wanted to spend that money, you better give a reason. "You have to explain why you need to take this money out of the group. You can use units for any of their business and they have a gas station, a grocery store, a clothing store—they have the basic things you would need, and one of their teachings is, 'If the Order doesn't have it, we don't need it.'" She adds, "I did not realize how abusive and controlling it was until I escaped and opened up my own bank account. When I go get money from my bank, I don't have to say, 'I would really like to buy lunch today.'"

Isolation from the outside world means no one sees the children's bruises, says Andrea. If an Order adult sees one, they tell the child to cover them up. "It was obvious to me how bad some of it was—hitting a child with a board," she says, which Jessica experienced. But with other treatment, she says, "You don't even realize it's abusive because that's all you know."

The Order's fathers keep a low profile, showing up when it's time to impregnate their wives. Jessica, Andrea, and Shanell claim that there is very little financial support from them, leaving their many wives and kids living in squalor. "Within the group, at church, you can say that they're your dad, but you can't in public," says Jessica. "You never call him Dad, you call him Daniel."

It's shocking to realize this lifestyle is occurring right here in the United States—and shocking that, for the most part, the group's illegal activity is not stopped by authorities. "The Kingston group tries to blend in with normal society. They look like everybody else, they blend in, and they cannot be identified. And nobody really knows how big this group is," Jessica says. "They put fake names on their birth certificate, and so how are they ever going to link them to each other?"

Isolation from the outside world means no one sees the children's bruises.

In one episode of the docuseries, Jessica meets with a woman who has texted her anonymously asking for help. When Jessica sees her, she knows that they're sisters. But since she has as many as 200 siblings, she can't quite remember her name.

Their goal is to repopulate the earth, the sisters say. "They think they're going to have so many kids that eventually, they're going to take over the world," Jessica says. "Their population has increased—like doubled—in one year because the children are having children."

Andrea sees this expansion as an opportunity, that it might attract attention from the legal powers that be. "I'm hopeful it's getting so big they can't control it anymore," she says.

If this group is so huge and powerful—and has so much to lose by exposure—are the three women afraid of retaliation? "They intimidate and harass," says Jessica, who has had to change her name several times already. "At this point, my case is so public...so if something were to happen to me, the first place they're going to look is the Order." On the show's pilot, the trio bring a burly security guard along as they help a woman sneak into her own home to grab belongings for herself and her two young daughters.

She knows that they're sisters. But since she has as many as 200 siblings, she can't quite remember her name.

The sisters don't want anyone else to go through what they did, so they've dedicated themselves to responding to every anonymous phone call and random text for help. To watch their rescues, tune into Escaping Polygamy on Tuesdays at 10/9c.

This content is created and maintained by a third party, and imported onto this page to help users provide their email addresses. You may be able to find more information about this and similar content at piano.io
Advertisement - Continue Reading Below
More From Culture
Halloween Costumes You Can Wear for Work Zooms
'Empire Records' Helped Me Understand My Queerness
Advertisement - Continue Reading Below
Iconic '90s Movies to Binge-Watch Right Now
HBO Is Giving Fans a Special 'Euphoria' Episode
Horror Movies Even Scaredy Cats Can Watch
Who's Who In 'The Haunting of Bly Manor'
Avengers Fans, Assemble: 'WandaVision' Is Coming
There Was a 'Friends' Reunion at the Emmy's
When Is 'Schitt's Creek' Coming to Netflix?
The 2020 Emmys Had a Confusing Vibe