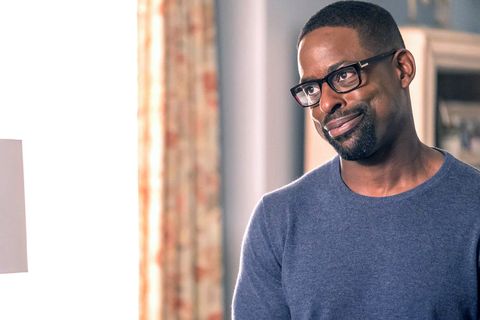 Sterling K. Brown is having one hell of a year. Admittedly, that statement might be perennial—ever since Brown’s breakthrough role two years ago in FX’s acclaimed The People vs OJ Simpson: American Crime Story, he’s been on a thoroughly deserved hot streak. Two days after the actor won an Emmy for his performance as the conflicted prosecutor Chistopher Darden in OJ, the pilot episode of This Is Us premiered on NBC and became a genuine overnight phenomenon.

"We get to move forward and show what happens as this family moves into the future."

The show’s unique blend of family drama with a puzzle-box structure built across multiple timelines resonated with audiences on a level nobody anticipated, and among the show’s talented ensemble, Brown is the standout. His nuanced performance as the Pearson family’s driven, anxious adopted son Randall was hailed from the outset—and has now amassed historic Emmy, Golden Globe, and Screen Actors’ Guild award wins. Most recently, Brown played a small but extremely significant role in Black Panther, Marvel’s long-awaited first black superhero movie, which debuted earlier this month to ecstatic reviews and record-breaking box office.

We sat down with Brown earlier today on the third floor of a repurposed church in Harlem, a previously vacant building which has been transformed by Clorox and Thrive Collective into a new community space. Due to open this evening (right in time for the mid-season return of This Is Us), the newly renovated center will provide arts programs to at-risk youth in the community. In addition to discussing the initiative, Brown spoke to MarieClaire.com about the potent cultural significance of Black Panther, the process of keeping twists secret on This Is Us, and what’s to come for Randall in tonight’s new episode—and in season three.

On tonight’s new episode of This Is Us:

"What happens in Vegas, right? The family is out there for the bachelor and bachelorette parties for Kate and Toby, and you’ll see a little tension between Beth and Randall over this trip. You’ll see Kevin in Vegas, which is not a natural fit for someone who's just out of rehab. And there's a beautiful past storyline that deals with the anniversary of Jack and Rebecca. That’s all I’m going to say!"

On Randall and Beth’s decision to buy a building and become landlords, and the return of Deja, the teenage girl they temporarily fostered earlier in the season:

"There's a lot going on. We just wrapped production on this season last Friday, but our writers are still breaking the story for season three, so one of my favorite things is to go into the writers room and hear what they have in store for us in the future. Dan [Fogelman, the show’s creator] loves to share, and his mind never stops working, so there are definitely gonna be plans involving the building.

Beth and Randall bought the building wanting to instill a sense of dignity to the people who were living there, because it had been so mistreated for such a long period of time, and they want to give them a space that's worthy of them. As for Deja, I can’t say too much as to whether she’ll be with us or not, because that’s still being worked out over the next three episodes."

On the unexpected flash-forward twist in the ‘Super Bowl Sunday’ episode, where the show moves into the future for the first time to show a decades-older Randall and a twenty-something Tess.

Note: This moment revealed that the little boy glimpsed in the midseason finale, who we all assumed would be Randall and Beth’s next foster placement, is actually part of future Tess’s storyline.

"I knew about it from the beginning of this season, and so after the midseason finale people would ask me 'Oh, so you guys are going to take on this little boy? How exciting is that?' I’d be like '....Yeah! It's pretty cool,' knowing the whole time that the little boy was obviously not going to wind up in my home.

It just opens up so many different possibilities in terms of where the show can go, as long as there's a Pearson family member connected to the story. We can continue to explore the past, like we've explored a character who's been dead from the beginning of our show, but he's still very much alive and a part of our show in Jack and William. And now we get to move forward and show what happens as this family moves into the future. It's exciting, I dig it. The ageing makeup takes a while, but it’s fun!"

On the show’s detailed and moving depiction of Randall’s anxiety disorder:

"I have members of my family with different social anxiety disorders, who I've watched throughout my life, and I have a real strong sense of empathy about it because people will tell them to get over it. Or expect them to make adjustments for the comfort of people around them, not recognizing—because they don’t have an open wound or they aren’t walking with a limp—that what they’re dealing with is in fact an illness.

For Randall in particular, he's triggered when he's feeling overwhelmed, and so he has to try and find a way to maintain an internal sense of calm. He has tools that he can use to negotiate it, but sometimes things happen in such a way where he can’t. I really appreciated it when people would say, 'Thank you for showing this, because we don’t see it that often.' People can be very dismissive, but mental health is as real concern, and we need to recognize that it needs attending to in the same way as any other illness."

On the reactions to Black Panther:

"We got a standing ovation at the Los Angeles premiere before the movie even started, because people were just so hungry to see themselves on screen. To be on that set, to get this level of production (this is a 200 million dollar production, with another 150 that went into marketing), and to think that a business as successful as Marvel put their money where their mouth is in terms of diversity for a film with an African-American cast—it fills me with a tremendous sense of pride.

It’s a recognition that stories that are specific to people of color have a universal reach. It's not just for that community, but people can see themselves in Wakanda. It's through the specific that you're able to reach the global, and I think the box office is saying that way better than I could right now."

On the social impact of Black Panther:

"There is a social consciousness to this picture that I don't think has been explored in any of the other Marvel films, and this central question of 'Am I my brother's keeper?' that Wakanda is trying to work out for itself, and that N'Jobu and Killmonger try to take on for themselves. It has to be done with responsibility and with integrity. When Black Panther buys that building at the end of the movie and we see those kids on the outside, it's sort of the perfect tie in to being here, in this moment. Recognizing that we can take ownership of our spaces, collectively, we can bring communities together, and it's a privilege to be a part of."

On what it would have meant to him to see a movie like Black Panther as a kid:

"It would have meant everything. Growing up, I wanted to be Superman, I wanted to be Batman, and I would still whistle the tune to myself—Christopher Reed was the man! But now I get a chance to see myself in Chad [Chadwick Boseman, who plays Black Panther], and my son gets a chance to see himself in someone who looks like him. And then the reverse, which delights me as much if not more, is that little children of other ethnicities are now dressing up as the Black Panther. Just like I did as Spider-Man or Superman or Batman in the past. It's nice to know that something that was so unheard of, or unthinkable, will now become sort of normal."

On his participation in the Clorox and Thrive Collective initiative, which enlisted volunteers from the local community to help clean up the space that has now become a youth arts center:

"The whole concept behind it is that once you clear away the dirt and the mess, not only are you improving your environment and taking a sense of ownership over your environment, but there are studies that Clorox has conducted that show taking responsibility for cleaning your own space increases happiness, your empathy, and your desire to make a meaningful contribution to your community. Being a dad, having two young boys right now, these are things that I'm trying to instill into my children, so it seemed like a natural fit for me to be a part of this. Just a couple of months ago, this space would have been unrecognizable, but Thrive got 250 volunteers from the community, they got funding from Clorox, and now a new space has been made so that kids can express themselves through the arts."

This Is Us returns tonight at 9 p.m. on NBC. For more information on Clorox and Thrive Collective's 'Clean Is The Beginning' initiative, visit the website.

Emma Dibdin Contributor Emma Dibdin writes about television, movies, and podcasts, with coverage including opinion essays, news posts, episodic reviews and in-depth interviews with creatives.
This content is created and maintained by a third party, and imported onto this page to help users provide their email addresses. You may be able to find more information about this and similar content at piano.io
Advertisement - Continue Reading Below
More From Culture
'You' Season 3 Is Adding a Menacing Character
'Fate: The Winx Saga' Season 2: Everything We Know
Advertisement - Continue Reading Below
Who Is Michelle Young on 'The Bachelor'?
Who Is the Voice on the Radio in 'WandaVision'?
Everything We Know About Matt James
How to Join Marie Claire's Virtual Book Club
Watch UCLA Gymnast Nia Dennis' Epic Floor Routine
Fans React to 'Euphoria' Special 'Part Two: Jules'
'Detransition, Baby' Is Our Feb Book Club Pick
'The Bachelor' Is Back!