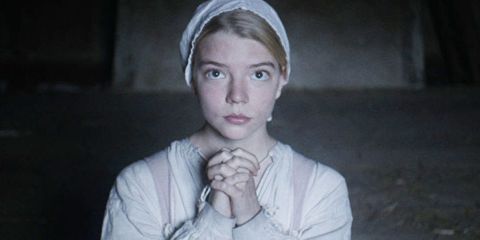 The real horror in Robert Eggers' new film The Witch: A New England Folktale isn't satanic goats, baby abduction, or even nefarious witches in the woods—it's the limited and punishing road to womanhood.

Welcome to 1630 New England, where our coming-of-age heroine, Thomasin, is coming face-to-face with puritanical gender roles, and her culture's vilification of women who break ranks. The movie, which opened last month to critical acclaim and has made $22 million at the box office, turns these suffocating circumstances on their head. Instead, it uses them to show us how much Thomasin, a girl who is eventually (spoiler alert, in case you hadn't already guessed) brave enough to seek autonomy, stands to gain by taking the other, more transgressive role for women. She chooses to be a witch, the most reviled manifestation of womanhood—and she's all the better for it.

The real horror in Robert Eggers' new film The Witch is the limited and punishing road to womanhood.

When we meet Thomasin, her family is being exiled from their community and forced to settle in a geographically and emotionally remote place. At the time, trade was the only means of attaining food and goods that you could not make or grow yourself—and trade relied on trust and social ties. It's understandable that Thomasin's parents then agonize over their new circumstances: crops aren't coming in, money is scarce, hunting is touch and go, they have five children to feed, and they're outcasts from society. Economizing their eldest daughter through traditional marriage is the logical next step. Thomasin's family is all too willing to take her to town and marry her off to whomever will house her.

This tension between the domestic home and independence is clear from the get-go. We first see Thomasin as a girl staring into the woods, returning again and again to gaze into the wilderness each time she's scolded for failing at the endless string of household tasks she is assigned. If church and the nuclear family unit are the foundation on which puritan life was built, the woods represent everything that's dangerous, disorderly, and sinful. Thomasin wants a life beyond the boundaries of the home—the limited and prescribed life that she, as a woman, can look forward to leading.

Thomasin and her brother Caleb
A24

To be a wife and mother was the only acceptable life for a puritan woman. Keep in mind that the very idea of personal freedom would have been a questionable concept to the puritan people. The Calvinist religion, to which Thomasin and her family subscribe, dictates that god predetermines a person's fate—even your own fortune in the afterlife was not under your control. In this historical context, autonomy for women is not only reviled—its maligned. We see that being "a witch," like being a feminist, is just another term for believing in self-determination.

That women were unholy by nature—and had to be anchored by marriage and family—was a common theme in the New England witch trials. In the 1600s, transgressive women were those who failed to satisfy the two most important traits for a female: to be godly and to be a mother. Defying these roles often manifests in folklore's most frequent female archetypes: the woman in red and the crone. Red, the color of lust and menstrual blood, is a symbol of sexuality and coming-of-age, while the crone is the withered fate of a woman outside of the traditional family unit. In The Witch, we are visited by both.

We see that being "a witch," like being a feminist, is just another term for believing in self-determination.

The crone—nude, cackling gruesomely, and bathed in blood—materializes throughout The Witch. First, when Thomasin's baby brother, whom she fails to watch closely, suddenly disappears. Though the family initially blames a wolf, we know better. Later, we see a woman out of focus clad in nothing but the evidence of baby Sam's brutal carnage.

The Witch then introduces us to another symbol of the transgressive female: the sexually independent woman. When Thomasin's brother, Caleb, gets lost in the woods, he's greeted by an unfamiliar, buxom woman draped in a red cloak. We're already aware of Caleb's approaching sexual maturation when we catch him eyeing his sister's barely-revealed neckline. When he returns from a tryst with the woman in red, nude and exhausted, his transgression is completely overlooked. Instead, he turns the family's attention to Thomasin, crying out "Her nether-parts, she sends them upon me!" He then prays to God in an orgasmic fashion, purifying his soul before suddenly dying. It's here that Thomasin's family becomes convinced that she is the witch who has been terrorizing their family with her wanton wickedness (or just, you know, wanting a life beyond the home).

With her parents now determined to reject her, Thomasin finally rejects them: She defends herself against their physical attacks and executes both a literal and metaphoric assault on the traditional family unit, freeing herself from society. Following the family goat into the woods, she joins a circle of similarly naked, blood-soaked women. Her eyes become wide with wonder, then laughter, and finally levitation.

The Witch may present like a highbrow horror film, but it delivers a powerful feminist message: She's now a woman, with the awesome power to determine her own life.