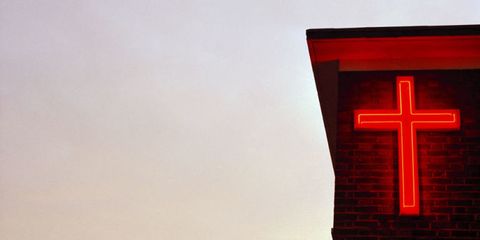 A friend recently asked me if I'd seen the documentary film Jesus Camp. "I lived it," was my response.

From the time I was five until about age 16, my mom, step-dad, siblings, and I headed to church every Wednesday night and every Sunday morning. Ours was the kind of church where people spoke in tongues, laid hands on one another for healing, fell over while everyone prayed, and heard from the pulpit that we should vote Republican. The pastors told us being gay was an abomination, and started teaching us around the age of seven that we needed to save sex until marriage. The most intense thing we were told was that anyone who didn't "get saved" by accepting the fact that Jesus died for our sins would burn in hell.

"When I spoke up to defend the LGBT community in youth church, someone told my mom that I was a lesbian."

This prospect terrified me, but it was many years before I came around to the idea that there might not actually be a hell.

When I was much younger, in elementary school, I loved church. I believed everything they told me. I loved God and Jesus and wanted all of my friends and family to be with me in Heaven, so I did a fair amount of informal junior evangelizing. When people I loved wouldn't accept Jesus, I became sick with worry. I would ask them to please "get saved" so we could all be together in Heaven; I was desperate to keep people I loved from an eternity in hell.

Beyond this, I was instructed to take the Bible literally and at face value, assuming it was the word of God himself. If I questioned anything, we were accused of "back-sliding" and everyone would start praying for me (this happened multiple times in my teenage years). When I spoke up to defend the LGBT community in youth church, someone told my mom that I was a lesbian, which of course upset her for years.

One of my worst fears was the Rapture, the "end of days" during which some Christians think Christ will return to take all the saved people back to Heaven, leaving all the "sinners" behind on earth to contend with the anti-Christ. I was always afraid of somehow getting left behind in the apocalypse, and being alone in a chaotic world without my family. Throughout my childhood, I was plagued by nightmares and lost sleep.

As I aged and grew into a more independent-minded teenager, I came to disdain the teachings of our church, and would beg my mom not to make me go. For a long time, I had no choice but to continue attending services twice a week, even though at that point, I was blossoming into an atheist.

"I was sick of hearing about women as second-class citizens."

I was sick of hearing about women as second-class citizens, disturbed by the hatred for gay people, and generally nauseated by what I perceived as fear-mongering tactics to keep congregants in line. I would roll my eyes when our pastors talked about hell and chortle when they made political prophecies (yes, they would try to predict the outcome of national politics). There were some other teenagers who'd pipe up to express distress or concern about church doctrine, but all of us were seen as highly suspicious, and nobody was eager to entertain our dissent.

I don't exactly remember the last church service I ever attended. At some point, my church-going parents relented and didn't force me to go. I loved having more time for school work and friends on Wednesday nights, and I discovered that sleeping in every Sunday was the real Heaven.

Although it felt good to be done with church, the fear and shaming and guilt stuck with me for years after I left the church. Distancing myself from the fear instilled in me by a hyper-conservative religious upbringing has been a big task, and one I wish I didn't have to deal with. Therapy was helpful for getting rid of excess negative feelings church instilled in me, and I've always found great support among others who grew up in a very religious setting and who also later defected.

When I think back on church now, I do have some fond memories. We did have fun at summer church camp, and there were times I felt safe to process my feelings with friends at church.  I was also given a creative outlet by being in church Christmas musicals. But no matter how pleasant some of these memories feel, I know I made the right decision to leave a church that seemed more interested in scaring people than improving their lives.

"I know I made the right decision to leave a church that seemed more interested in scaring people than improving their lives."

My siblings and I all have varying religious or spiritual beliefs now, though I think I'm the only atheist. My parents who went to church are on different but similar religious paths these days; that's fine with me, since I don't have to attend services with them anymore.

Leaving church behind is a forever decision for me. I never think about looking back, or seeking a new religious path to follow. Without the confines of a church and Bible to answer to, I've felt more free to explore the world through lenses that resonate with me more: history, literature, travel, psychology, and philosophy. Though I always felt church wanted to narrow my mind to a single set of beliefs, it mostly served as a cautionary tale, and for that I am eternally grateful.