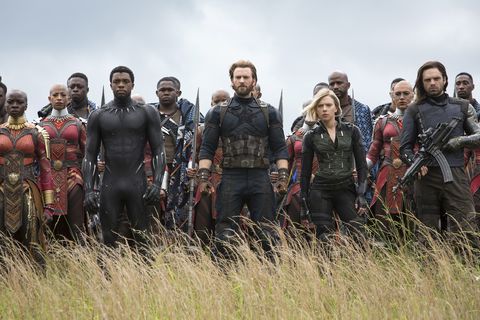 Marvel’s Infinity War is what geeky dreams are made of. The brand certainly knows how to make a film that is fun, funny, thrilling, intense. And yet, after 10 years and 18 films, Marvel still is clueless when it comes to their female heroines.

Without letting any spoilers slip, Infinity War is the battle to end all battles. It spans Earth, many galaxies, and a few periods in time. It’s complex, with layers of story and action alike, and a cliffhanger that leaves you aching for May 2019 to get here already (when Infinity War 2 is slated to premiere).

To be completely honest, I enjoyed the movie, as did my 13-year-old nephew who tagged along as my guest. And, it was really only when I was reflecting on its impact, that I started to realize that every. single. plot. point. revolved around men.

Of the more than twenty superheroes on screen, seven are women: Gamora (Zoe Saldana), Scarlet Witch (Elizabeth Olsen), Black Widow (Scarlett Johansson), Mantis (Pom Klementieff), Nebula (Karen Gillan), Shuri (Letitia Wright), and Okoye (Danai Guerrera). You could say that visually, Marvel did it’s homework on representation—even if the only Latinx actress is playing a green alien. But unfortunately, that’s where the nice things I can say end. Of the seven women, Shuri, Okoye, and Nebula have mere minutes of screen time, with lines that amount to not much more than a few sentences. And we only see Mantis and Black Widow in battle scenes, and not much else. The two women that get the most screen time, Gamora and Scarlet Witch, are there for one purpose and one purpose only: to serve as a plot point for male arcs.

Using Gamora and Scarlet Witch as ballasts for their male counterparts betrays everything those characters are supposed to be. Gamora, by Marvel’s own definition, is the “deadliest woman in the whole galaxy.” She’s a rebel, a fighter, and the only one that super-villain Thanos (who happens to be her “father”) gives any thought to. In the comic book series, this woman survived genocide, rape, and being left for dead—and then recovered to become the galaxy’s most feared assassin. Scarlet Witch is one of the most powerful sorceresses in the Universe, with the ability to alter realities. She’s so powerful, she can destroy infinity stones with her magic. Yet both—the “deadliest woman” and the “powerful sorceress”—are reduced to girlfriends in Infinity War, their actions, or lack thereof, useful only because they affect their respective partners.

Infinity War is the marker of many things for the Marvel Cinematic Universe (MCU). It’s the culmination of 10 years of comic book movie-making, a retrospective on the numerous careers launched, a celebration of the billions of dollars made, and an example of the many advancements of the last decade, including making the comic book universe more reflective of society by adding diverse cast members, most notably with February’s behemoth Black Panther. And yet, when it comes to their female characters, MCU fumbles.

Gamora and Scarlet Witch are reduced to girlfriends in 'Infinity War.'

Historically, the MCU has not fully embraced it’s female characters. Former Marvel CEO (current Chairman and Trump supporter), Ike Perlmutter, was famously outed during the Sony hack as believing that female hero movies don’t make money. That may have been true for films of the past, such as Catwoman and Elektra, which were both critically panned and misfires at the box office. But thankfully, society evolves, and in 2017 the world was gifted Wonder Woman, which not only had a female hero front and center, but a female director, Patty Jenkins, only the third in comic-book film history (Lexi Alexander directed 2008’s Punisher: War Zone and Rachel Talalay directed 1995’s Tank Girl). Oh, and it was the third highest grossing film domestically in 2017.

And yet, even without Perlmutter in a decision making role at Marvel, MCU’s women are still lying in wait. November’s upcoming release of Ant-Man and the Wasp will be the very first Marvel film with a heroine’s name in the title, and 2019’s Captain Marvel will be the very first Marvel studio film to have a heroine in the lead. Neither are solely helmed by women (Ant-Man and The Wasp is directed by a man and co-written by four men; Captain Marvel is co-directed by Anna Boden and Ryan Fleck, and co-written by seven people, four of which are women).

As we celebrate Marvel Studio’s 10th anniversary, we have to also demand progress and equal representation in front of the camera and behind it. Fifty two percent of movie tickets are bought by women, and yet in the film Marvel calls its “unprecedented cinematic journey,” the very peak of Marvel Studios filmmaking portfolio, women are once again are simply just male props. Hey Marvel, haven’t you realized yet that women deserve better?